Music fans outside of Ireland by and large know Thin Lizzy and the band’s drummer, Brian Downey, from their 1977 hit, “The Boys Are Back In Town.” The song features one of the greatest guitar riffs and some of the most memorable lyrics of the classic rock era. It also boasts an unstoppable uptempo shuffle groove courtesy of founding drummer Brian Downey.

Lizzy’s sound was part proto-metal, part pub rock, and part heavy soul, a musical amalgam that perfectly reflected the concerns of their punk-poet laureate, Phil Lynott. Besides Lynott’s imposing presence, the group counted among its ranks several burning guitarists (including late great six-stringer Gary Moore), and in Brian Downey a highly skilled drummer with explosive chops, a fine sense of dynamics, and one of the sweetest grooves in heavy rock.

Downey grew up in Dublin, the son of an Irish pipe band drummer. His father also passed along a love of the records of West Coast blues man Eddie “Cleanhead” Vinson and Chicago’s Oscar Brown Jr. As a teenager Brian forged a life-long musical alliance with local singer and bassist Lynott, and the combination of Downey’s rock, jazz, and blues talents and Lynott’s unique strumming and circular bass playing became the core and essence of Thin Lizzy’s sound. Besides “The Boys Are Back In Town,” among Downey’s recorded high points are “Emerald” and “Cowboy Song,” also from the 1976 album Jailbreak, the version of “Sha-La-La” on 1978’s Live And Dangerous, and “Roisin Dubh” from 1979’s Black Rose.

Thin Lizzy broke up in the mid-’80s, but Downey continued to play, appearing on several Phil Lynott and Gary Moore solo albums (including Moore’s 2007 release Close As You Get) and staying active back home, while the band, with Tommy Aldridge or Michael Lee behind the kit, conducted occasional tours. In recent years a spate of “new” live Lizzy material from the classic period hit the shelves, including the CD Still Dangerous: Live At The Tower Theater Philadelphia 1977 and the DVD Are You Ready: Greatest Hits Live. In 2011 Downey rejoined the band for a worldwide tour. 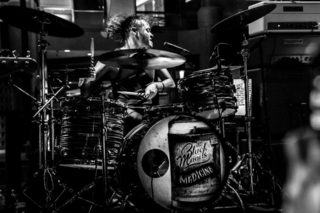 On the Beat with Chico Diaz from the Black Moods: Talks New Album, Gear, and Influences