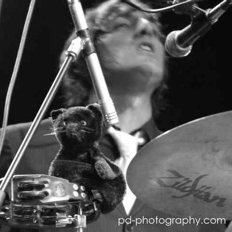 Hi, I’m Benjamin Cartel, half of the indie/folk/pop duo Kaiser Cartel. I write songs with Courtney Kaiser, mostly play drums, but also play guitar, and sing in this duo. In 2008 we released our first album, March Forth, and in June of 2010 our second album, Secret Transit, came out. In the winter of this year we’ll be on the road in the U.S. We’ve already been all over the U.S. and in Europe, promoting the new album.

There are a few songs in our live shows where I sit at the drums with a guitar while playing the bass drum and hi-hat with my feet. I do this on the songs “Inside Out” and “Favorite Song” from March Forth. Both songs have also been featured in the HBO show Bored To Death. Other times I will play a xylophone melody while playing a backbeat and sing, as in “Brave Enough” on Secret Transit. I also play xylophone while playing bass drum and hi-hat with my feet on March Forth’s “Dog Stars.” In addition, there are a few songs where Courtney Kaiser, the main guitarist, will play the drums, and I’ll be up front singing and playing guitar, like “Minefield,” from Secret Transit and “The Flood” from March Forth. Almost all of what we play live is in real time, with minimal use of samples. We prefer the natural sounds of two people playing in real time. It gives our music a sense of simplicity and intimacy.

My kit is very basic—bass drum, snare drum, floor tom, two cymbals, and a hi-hat. It’s easy to add an extra instrument on top of the snare drum or on my lap. Recently I’ve started using a sample pad. I keep myself open to experimenting with new technologies. Part of the fun of making music with two people is finding new ways to add and subtract sounds to and from the mix. It’s a never-ending source of entertainment for both Courtney and I.

Singing and playing drums, which is something I do often, is always a challenge. I believe it’s a fine art. It takes a lot of practice to make singing and drumming seem effortless in a live show, and harmony is something that is central to our sound. With a duo, every sound makes a big difference, so it’s important for the drums and the singing to flow together. After a show, people from the audience will often ask, “How are you able to multitask by singing and playing two instruments at once”? I always answer, “If you can sing, play guitar, and tap your feet at the same time, then you can do what I’m doing.” But sometimes I forget that after years of playing drums, my bass and hi-hat feet have become ingrained in my muscle memory, so I’ll often add, “It also helps if you’ve been playing drums for most of your life.”

For more with Benjamin Cartel and Kaiser Cartel, go to www.kaisercartel.com, or www.facebook.com/kaisercartel. To see the video for the single “Ready To Go,” go to www.youtube.com/watch?v=mVs19k9H0tc.