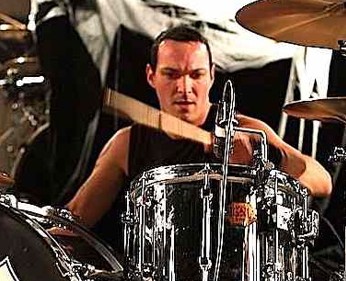 Hello, my name is Jamie Miller. Like the rest of the entries on the site, I will begin by saying I have been a huge fan of Modern Drummer magazine for a very long time and am pretty stoked to be writing this! With that said, I will give a brief history of “me.”

Among other things, I am the drummer for the band Night Horse. We released a new record called Perdition Hymns on August 3, which, if I may say so myself, is pretty ripping. The Night Horse sound could be described as “Black Crowes crossed with Black Flag with a southern-rock twist” (maybe). In this day and age, it’s pretty great for a dude like myself to find some guys that aren’t desperately trying to follow the latest trends and just want to make cool music that they would want to listen to themselves. It’s not often you find youngsters into the Allman Brothers and Thin Lizzy.

But let’s back up a bit. I was born and raised in Baltimore, Maryland. I come from a family of killer musicians. I started playing drums at the age of three, jamming with said family of killer musicians. I started playing semi-pro at eight years old and have never looked back. I grew up on a steady drumming diet of Buddy Rich, Gene Krupa, John Bonham, Ringo Starr, Stewart Copeland—you get the point.

When I was about sixteen years old I met a fellow local drummer called Shannon Larkin. After a few years of obsessively watching Terry Bozzio’s Soloing Over Ostinatos video and trying to figure out a way to sneak that madness into a rock context, I saw Shannon doing it in his band and I was blown away. Shannon and I went on to become friends, and we have since gone on to swap band drum chairs like ex-girlfriends a few times. When Shannon left the band Souls at Zero, I stepped in. When I left the band Snot, he stepped in. Yes, I spent the late ’90s in a band called Snot, recording one album and touring for two years straight before our singer passed away. You can Google that story if you like. I have spent the past few years playing guitar, of all things, in a band called the START as well as doing lots of session work behind the kit.

So now let’s talk drums. I’m a big fan of simple yet expressive drumming. I love taking the drums for a super technical whirl as much as the next prog-ster, but in a more pop or rock context. I like to make the drum parts as air-drumming friendly as possible. I’ve found that the only person that’s impressed by your elaborate drum solo in the middle of the second verse is you. I feel as though the drums can have their own verse and chorus for everyone to jam along to.

Now let’s talk gear. I play an old Premier Signia kit—14″ tom, 18″ floor tom, 28″ kick drum…yep, 28″. I have yet to find a kit that sounds better. I use Sabian cymbals. I’m a big fan of their Neil Peart Paragons, and I’m gonna make a suggestion to all you heavy hitters out there: Use larger-sized but thinner cymbals; they last much longer (seriously).

I’ve been at this a long time, thankfully, and one thing I like to say to drummers and all musicians is respect the gig. A lot of dudes and dudettes out there take it all for granted, and that’s a big mistake. It’s all about the music.
For more on Jamie Miller, go to www.myspace.com/nighthorsemusic or www.thisisthestart.com.