Hi, MD readers! The making of Toph-E & the Pussycats’ new CD, No Ordinary Day, featuring Clifford Carter on piano, Will Lee on bass, Ralph MacDonald on percussion, David Mann on tenor and soprano saxes, and me on drums, was a long project, stretching over a year and a half. It was recorded at the now shuttered Clinton Recording Studios in New York City—probably one of the last projects to be done there after years of great albums and movie soundtracks being recorded there by chief engineer and owner Ed Rak.

We did twelve tracks during that period—some brand-new compositions by Will Lee and David Mann, Clifford Carter, Ray Chew, and myself, along with re-arranged covers of tunes by Angelique Kidjo, Herbie Hancock, and Schubert. We re-cut our anthem, “Tee,” by the late, great Richard Tee, Will, and I—which also appeared on our last album, Live In Detroit. This song holds so much meaning for all of us. Richard and I were in the band Stuff, and we played on numerous record dates, TV shows, and jingles together, which is where Ralph, Clifford, Will, and David also got to know him. This was Richard’s last recording at home, and we transcribed and arranged it for the band to stretch out on. Check out Clifford’s piano solo followed by Dave’s tenor.

Clifford is in Latin territory with his “Un Nuevo Mundo” and our recasting of Herbie Hancock’s “Maiden Voyage.” It was really fun playing a cascara and drumset hybrid approach. Our great friends pianist/composer Rob Mounsey and jazz guitarist Steve Khan consulted on these two tunes, to give us authentic parts and the correct mix images. “Opus De Tophe” is something Ray Chew and I wrote while fooling around with Horace Silver’s “Opus De Funk,” which, along with “Filthy McNasty,” “Song For My Father,” and “Doodlin’,” is one of my favorite tunes of his. Lots of room for my drum fills between sections, and really fun to play live. Check out Clifford and David’s “fours” leading to Will’s funky bass solo, one of two on this record—and both first takes!

I am particularly happy with my take on a Schubert Ab melody, which we played as a “Caribbean Waltz.” I had been listening to my son Russell practice this piece on piano upstairs while I was practicing drums downstairs, and I kept hearing the changes in a different way. I thought this would make an interesting vehicle for the band and add something ballad-like to the set—calm and somber. Preceding that track is “Tatchedogbe” by Angelique Kidjo, which I transcribed and arranged for the “cats in the jungle.” It’s a dense track, but everything is in its place and builds the groove in layers of insistent percussion, bass drum, bass, and hi-hat. I took things that Clifford played on the original take and made some effected loops out of his cool Rhodes and B-3 parts.

The final track and the one we recorded last was Herbie’s “Maiden Voyage.” Clifford’s cool arrangement spotlights himself, then David, then Will—who rips another great, thoughtful bass solo—and then me, stretching the limits of my technique (such as it is), trying to be musical.

It’s a cliché to say, but this album was a “labor of love” from start to finish, with all the Pussycats contributing in significant ways throughout. We all wanted to do the material that grooved us in our live performances—our first CD, Live In Detroit, documents one of those—so this time it was especially sweet to get in our familiar comfortable studio environment and make the best-feeling and best-sounding record we could. A lot of the labor involved just coordinating schedules of four super busy cats; Ralph’s touring with Jimmy Buffett, Clifford is with Art Garfunkel, David is producing artists and touring with Christopher Cross, Will’s with the Fab Faux and The Late Show, making for a delicate balancing act. Studio time and rehearsal time at Euphoria was booked months in advance, with the hope that something that couldn’t be turned down would not eclipse our sessions, making each one precious.

The drums I used on this record include my Yamaha custom HipGig toms (10″, 12″ , 13″, and 15″), a 20″ Recording Custom bass drum from my first trip to Japan in the ’70s, my Roy Haynes signature Yamaha snare, and assorted K and A cymbals from Zildjian, including 15″ hi-hats I bought in 1961 at Manny’s in NYC and Armand Zildjian’s 18″ “Beautiful Baby” sizzle cymbal. Love them, ’til death do us part! I also had my 12″ HipGig snare beside the hi-hat for special cross-stick and smacked sounds. And on “Impromptoph” I played an antique Ludwig parade drum that Will gave me for my birthday. Hope you all have a chance to check out the record. Enjoy! And yes, we are serious.

Afrobeat Master Tony Allen on Tour in the United States 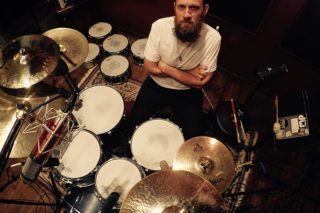 On The Beat with Joseph Arrington of Royal Coda: Keeping it Organic

On the Beat with Pat Petrillo: Catches Up and Talks New Music and Products