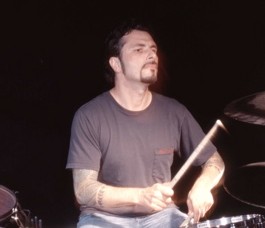 John Tempesta has worked his way to the top of heavy metal drumming, but his first inspirations and influences to pursue the instrument came via Ringo Starr in the Beatles film A Hard Day’s Night and Dennis Davis supporting David Bowie at Madison Square Garden in 1977. John bought a kit from a neighbor for twenty-five dollars and began to study everyone from John Bonham and Bill Ward to Terry Bozzio and Simon Phillips. In 1985, Tempesta entered into an important phase of his growth—acting as drum tech for thrash-metal powerhouse Anthrax’s Charlie Benante.

After four years with Benante, Tempesta struck off on his own and joined Bay Area thrash band Exodus. After three albums with Exodus, he left for cross-town rivals Testament to tour and eventually record 1994’s Low.

Tempesta’s big break came later that year when he joined White Zombie. With Astro-Creep 2000 (1995) and the hit “More Human Than Human,” White Zombie—and Tempesta with them—rose to the very top of metal. When the band split in 1997, frontman Rob Zombie kept Tempesta on for his solo work. The drummer appeared on the first two albums of Zombie’s triumphant campaign, 1998’s mega-hit Hellbilly Deluxe and the similarly successful The Sinister Urge (2001), as well as the 2003 greatest-hits collection Past, Present, And Future. His gig with Zombie also afforded Tempesta the time and opportunity to record with Black Label Society and Black Sabbath guitarist Tony Iommi, among others.

When Zombie put the band on hiatus in 2003, Tempesta quickly found himself in the rejuvenated Helmet alongside founder/guitarist/singer Page Hamilton. 2004 saw the band release their first album in seven years, Size Matters. After touring the U.S. and Europe for nearly three years with Helmet, Tempesta joined the Cult.

Aside from his continuing duties with the Cult, Tempesta is an in-demand clinician, holding dates everywhere from Moscow to Australia. He has also collaborated with Tama to release the John Tempesta Signature Stealth Snare.