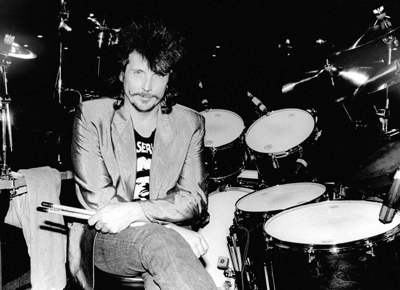 Richie Hayward, the drummer in the band Little Feat since their inception in 1969, was born in Clear Lake, Iowa, and was influenced by rock ’n’ roll pioneer Earl Palmer and big-band jazz drummer Sonny Payne. In 1966 he moved to Los Angeles and joined the Fraternity Of Man, whose 1968 song “Don’t Bogart Me” was featured in the classic counterculture film Easy Rider. Soon Hayward met singer/songwriter/guitarist Lowell George, who along with keyboardist Bill Payne and bassist Roy Estrada, founded Little Feat.

Little Feat albums including 1972’s Sailin’ Shoes, Feats Don’t Fail Me Now (’74), and Time Loves A Hero (’77) were critical successes among the musically hip and were especially adored by drummers, who couldn’t get enough of Hayward’s indelible grooves and the way he used his kit not only as an anchor but as a melodic voice in the music. The 1978 live album Waiting For Columbus is, along with the Band’s Last Waltz, regarded as one of the finest concert documents of its era. In 1979 Lowell George dissolved the band, and later that year died of a heart attack while on tour in support of his debut solo album, Thanks I’ll Eat It Here.

In 2009 Richie was diagnosed with liver cancer, eventually succumbing to complications of lung disease on August 12, 2010.

This piece was adapted from Bob Girouard’s feature “What Do You Know About Richie Hayward,” originally printed in the February 2010 issue of Modern Drummer magazine.