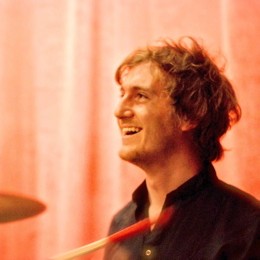 What’s up, Modern Drummer readers? Jonathan Schmidt from the bands Morningwood and AM To AM here! I’m currently in upstate New York writing with the band. I’m pretty sure everything leading up to this point in my career has been series of educated whims, meeting a ton of amazing people, working my ass off, and playing a whole lot o’ drums. The past two or three years have been exceptional in my drum world, as I have been lucky to have performed on Jimmy Kimmel Live and the MTV Logo Awards, and have even dabbled a bit in the Broadway scene in New York.

There were few things that I was concerned with when I was thirteen years old, but music and shenanigans were at the top of my list—I was compulsively practicing and learning as many Smashing Pumpkins, Nirvana, and Foo Fighters songs as possible. Those were definitely the three key bands that shaped the foundation of my style. The first time I picked up a pair of drumsticks I locked myself in my parents’ basement and emerged three months later wanting to join a rock band and take over the world…typical.

After a few years of college and many bands back home in Colorado, I made the move to Boston in 2007 to finish up my degree at Berklee College of Music. Needless to say, I had the chance to study with a ton of inspirational drummers, many of whom had a profound impact on my style and approach to drums. Kim Plainfield, Steve Wilkes, and Mark Walker were definitely the guys at Berklee who shaped my approach, even eleven years into my drumming career. My time in Boston definitely was when I became “session/tour/for-hire guy.” There were so many instances where I would fill in on gigs, head out for a few weeks on tours, and record drums for singles or EPs. It started getting the point to where I could memorize a ten-song set better than I could remember the name of someone I met at a party. I was in about four or five bands and nearing the end of school when I met the Capitol/VH1 Records band Morningwood.

It was in Boston where I met the current guitarist of both bands I am in, who was my “in” into Morningwood. I remember meeting the band in New York and starting the chain of rehearsals about five days prior to performing at the MTV Logo Awards, which was my first gig with them. That was definitely a mind-blowing experience, not just because of the magnitude of the gig, but the hilarious fact that a week later I was back in Boston standing out in the rain trying to hail a cab so I could get my drums to a gig—’tis the extreme nature of the industry. We went on to play Kimmel and had a string of shows with Jet and Papa Roach. I feel crazy fortunate to have met these guys; from the first five minutes of meeting them I knew it was going to be a good thing.

After getting into the New York City music scene, more doors opened and I was able to use my drumming skills outside of the “band” setting. One time I was invited to play for a read-through of a Broadway play based on a cult movie from the ’90s. I worked with Tony- and Grammy-award winning writers and conductors and an all-star cast, most of whom were in current Broadway plays. This gig was truly one of the most intense and rewarding musical experiences I have ever had.

I play full-time in both AM To AM and Morningwood and as a session drummer in NYC. AM To AM recently released a self-titled album, which I could not be more proud of, and we’ve been getting great reviews and a lot of press, so I can’t wait to see what the future holds for this band.

The more and more I practice and improve, the more I realize the importance of keeping it simple. This is not to say I don’t throw in some tasty licks or play intricate beats here and there, but there is definitely something to be said for simplicity. At shows, I like people to leave feeling exhausted and inspired, like someone was just punched in the chest then given a high-five. I currently play Yamaha drums and Zildjian cymbals and use Vic Firth sticks. Rock on!