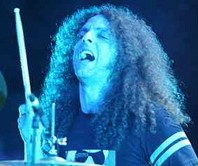 Hey, everybody, this is Bob Pantella from Monster Magnet. I’ve been playing drums since I was four years old, and I can’t remember ever wanting to do anything else—except the two-week period that I wanted to be an astronaut when I was ten.

I’m mostly self-taught, although I took lessons in grammar school (that’s when I learned to read music), and private lessons also. I went to Drummers Collective in NYC for a few months in the ’80s. Most of my learning really came from listening to records, turning the stereo all the way up and playing along. Good old Zeppelin II.

I started playing in bands when I was twelve, and I haven’t looked back since. I played in a band called Raging Slab in the early ’90s, and that was when I went on tour for the first time. I played in a lot of cover bands and in ’94 joined Love Among Freaks, who did the Clerks soundtrack. After that I started getting into recording and writing more. Then in 2003 I joined Monster Magnet, which brings me to this year.

It’s been a busy year, with another one coming up. I just finished recording a new album with MM, which will be out October 29. I also play drums for RiotGod, which was formed in 2007 with Jim Baglino (bassist for MM), Mark Sunshine, Garrett Sweeny, and me. We have a new record that was released on August 27 on Metalville records. We’re now on our first headlining European tour, with Winnebago Deal from the U.K., which runs through September 26. After that MM goes on a seven-week Euro tour from November 1 through December 15. In October I will be recording a new record with the Atomic Bitchwax to support our spring European tour, with that tour ending at the Roadburn festival in Tilberg, Holland. In between all that I also play drums for Cycle Of Pain, featuring JD, the bassist for Black Label Society, and we have a few one-off shows opening for BLS. Then C.O.P. goes into the studio to record a new record. Then MM goes back out to Australia in Late February/early March to be part of the Soundwave festival. Then it starts all over again with RiotGod recording a new record.

Playing in four bands is no easy task, but I think I’m starting to get used to it. Scheduling is really the toughest part of it all, but so far things have worked out beautifully. I have never been this busy in my life, and I really enjoy it this way. I really don’t like a lot of downtime because if I don’t get to play my drums, I’m not a happy camper.

Thanks everyone, hope to see you soon!