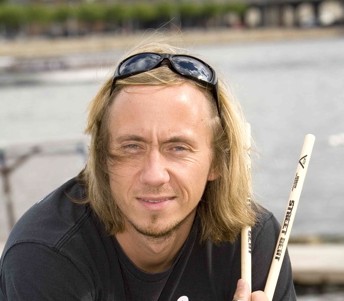 Dancing and drumming are the most ancient art forms, and they are absolutely wedded together, two sides of the same thing. We are practicing this primal, tribal art and transplanting it to the modern urban landscape.

I was born in Copenhagen, Denmark, and started playing drums at the age of nine. I’ve studied with a lot of great teachers, learning many different musical styles and techniques, and also attended the Rhythmic Music Conservatory. I’ve been pounding on things almost since I came out of the womb. But Danes aren’t generally known for being boisterous and loud. They’re famous for being quiet…and melancholy. So, after disturbing the peace and taxing my neighbors’ patience for twenty-four years, I came to America, land of joyful noise.

I moved to Los Angeles in 2002, recording and performing with guys like Grammy winner Robert Reynolds of the Mavericks, guitarist Andy Walo from Junior Wells’ band, and Mitch Perry of Edgar Winter fame.

The genesis of Street Beat was initially as a student outreach project for the Los Angeles Unified School District, designed to teach kids self-reliance and teamwork through drumming. The challenge was that there was no money for drums at all. So how could I do this in a way that would still be fun and exciting for the students? And that’s how the teaching tool of Repurposed Percussion was born, based on the theory that one can make music with almost anything, which is exactly what we did.

The birth of Street Beat as a theatrical act commenced in 2007 when I expanded the troupe to its current ten-piece configuration and took it on the road, touring all over the U.S., including Alaska. We take our drumming cues from cultures worldwide and mix them all into a gumbo of our own. I believe art should inform, but it also ought to taste good. One critic described us as ‘an urbanized journey through percussion,’ which sounds about right, but we’re also a tribal journey through the urban age.