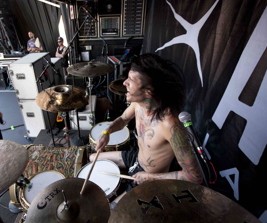 We just released our new, sophomore record, Selfish Machines. We’ve split up the set on Warped Tour, playing three songs from our first record and three from our new record. The three off Selfish Machines are the fastest and most aggressive songs on the record, which becomes somewhat of a challenge for me playing live. I strive to play as tight as possible, so it’s been exciting playing the new songs live and receiving an awesome response from the crowd.

We recorded with producer Mike Green, and I was lucky enough to track at Ocean Studios in Burbank, CA. It was the largest room I have ever played in. I tracked with a combination of vintage and new mics. We used three different mics on the kick drum as well as a number of room mics placed strategically throughout the room. Our main goal was to make our instruments on this record sound real, and I definitely think we accomplished that. I used four different snares on the record. I smashed a $6,000 overhead mic while tracking and it completely exploded, luckily an engineer on hand was able to repair it and I was able to finish tracking all twelve songs in ONE DAY!

If you come to a Pierce The Veil show, expect to see me going all out every night, no matter if there’s five kids watching or 500,000. We put a lot of time and meticulous thought into our live set, so our fans get a memorable and exciting experience. Pick up Selfish Machines in stores now! I love you all, and I’ll see you soon.

For more on Mike Fuentes and Pierce The Veil, go to www.myspace.com/piercetheveil. To download a clip of the band go to is.gd/cM3a4.