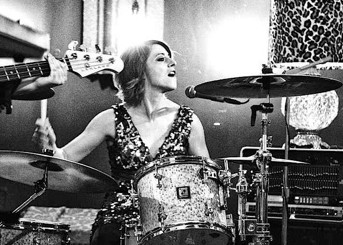 Welcome to my blog entry. I am elaine bradley (I don’t like capitalizing my name because I love lowercase e’s). I drum and sing backup vocals for Neon Trees, and we have been on tour with 30 Seconds To Mars and Mute Math. Basically, what that means is that I get to be around really, really good drummers almost every day.

I have always been a performer. I used to make tapes when I was really little. I would be the radio DJ, the songs, the stories, and the commercials. I became enthralled with the drums at an early age. I think I was about five when I started banging on pots and pans with wooden spoons. I would ask my parents for drums frequently, but they thought it was a phase that would pass. After several years, and tireless begging, they bought me a Sears drumset. It was a bass, snare, floor tom, hi-hat and crash (tiny splash cymbal mounted on the bass drum). I thought it was the coolest thing ever! Frankly, I wasn’t very good, but I played it all the time. Within a year, that little set was destroyed. Then my parents bought me my first real set—a black Tama Rockstar with Paiste cymbals.

Flash forward to my freshman year of high school. I formed a band with some friends and played the drums and sang “until we could find a drummer.” We eventually found a really good drummer, and I moved to guitar. I fronted that band for several years. It was during this time period of not playing the drums that I became better at them. That may sound weird, but it’s true. I would listen to and watch our drummer, and then I would air drum to everything in the car or at home. I learned to think of drumming in a way I hadn’t before—as an equal instrument, capable of evoking feeling just like bass and guitar.

That band broke up, and I went to Germany on a mission for my church. While there, I met one of my now–best friends. After we finished our time in Germany, I moved to Utah for school and to play music with Bryce. We tried getting together and playing guitars, but somehow it just wasn’t working. I felt bad because he didn’t have anyone else to play with, so I offered to jam with him once a week—him on guitar, and me on my old Tama that I still had. After years of not drumming, I began to drum again, and I discovered that I was better than I thought. So we formed a band with me on drums. That band ran its course around the same time that Tyler and Chris were looking for a drummer and bassist…and so the current line-up of Neon Trees was born.

If you like talking gear, then you’ll enjoy this little paragraph. I currently play a maple Sonor Custom Delite kit, and I love it. I play a maple Craviotto snare. I use DW hardware and Remo heads (except for the bass head, which is Aquarian). I use Vic Firth 3As, but I have been known to enjoy a 5A from time to time.
For more on Elaine Bradley and Neon Trees, go to www.fameisdead.com.