Hey to all the Modern Drummer readers out there. I thought I could drop you a quick note about something I think you’ll find interesting…I hope so, anyway.

I started playing drums, like a lot of us do, at a really young. To this very day, playing is one of the only things that still moves me. I suffered from enormous anxiety as a kid, and the drums were my way out of that. By playing constantly, I got a release from any cares I had in the world. I can honestly say, thank God for the drums—they saved me!

My start at drum instruction began in the basement of my elementary school on a wooden practice pad in the summer of fourth grade. From there I never stopped. I was playing in local bands by the time I was fourteen and playing professionally by the age of seventeen.

At twenty-five I bought a home and built a beautiful recording studio there. Then I started to produce a lot of records for local artists, which I also played drums on. I also study piano, and went back to school at the age of thirty-six for music composition and theory. Soon after, I played percussion with the Valley Symphony Orchestra, and was fortunate to land the gig playing drums and percussion for film composer David Newman.

Which brings us to the point of this article. To play professionally and make a living out of it…now that’s a trick. In my humble judgment, given today’s diversified music industry, it is no longer enough to just be good at one thing. I think we must all bring added value to whatever project we’re working on.

I became friends with a local filmmaker named Roger Nygard and started to write music for his movies, including his “Trekkies” documentaries. After years of friendship he asked me if I would get involved in the making of his latest documentary, The Nature Of Existence, which is being released this summer. Of course I said yes and immediately had to learn how to hold and operate a camera, set up shots, and think from a film-maker’s point of view. After traveling around the world and making this movie, I attached myself to the project as its composer. The movie is amazing. The experience continues to be amazing.

Make no mistake, readers: The drums are first in my life. They’ve taken me around the world playing in bands, selling records, touring, and most recently, making a movie.

This article is a fast snapshot of where the drums have taken me. My hope for you is that you stay open, stay focused, never stop playing, and bring to your artist, singer, songwriter, producer, or whoever more than you ever thought you could.

www.sullystone.com, and to learn more about The Nature Of Existence, go to www.thenatureofexistence.com.

On the Beat With Katie Herron of StarBenders: Reckless Punk and Classic Rock ’n’ Roll 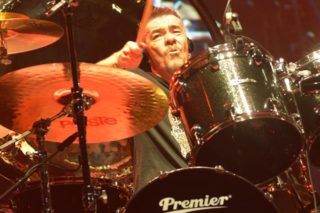 On The Beat with John Keeble of Spandau Ballet