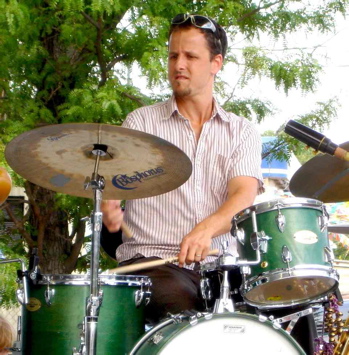 Hello from New York City. I am a drummer/composer/arranger and producer. I have played with a wide range of musicians from Lenny Kravitz to Cab Calloway and I have worked in many different genres (rock, jazz, Latin, Afrobeat, reggae, country).

Growing up in “the big city” provided me with many opportunities and influences along the way. I switched to the drumset after studying classical piano for six years. Then the progression was something like this: love of classic rock (Jimi Hendrix, the Doors, the Beatles, Led Zeppelin) eventually led to a short heavy metal craze (Iron Maiden, Metallica). The chops needed for playing metal eventually led me to a short prog rock phase (Rush, Yes) due to the interest in odd times and the heavier usage of syncopation. This led me to a fusion phase (Weather Report, John Scofield, Chick Corea). Because, hey, if you want to hear more syncopation, chops, and odd time signatures, you don’t have to look any further. This also opened up my interest in Cuban/Brazilian music.

This led me to the inevitable question: Where did “fusion” come from? What are these guys drawing from when they play this stuff? People would say, “It’s just a combination of rock and jazz.” When I first listened to traditional jazz, though, I didn’t hear the connection. But then it started to grow on me. Because of starting out as a piano player, I was very interested in melody and harmony. Although I loved to listen to “athlete drummers” with Olympic chops, this seemed like a dead end, musically speaking. I wanted to be involved in something that had a high level of freedom as well as musicality, and the various forms of acoustic jazz ended up being my most natural voice.

After graduating with a composition degree from Berklee College of Music and a masters degree from Manhattan School of Music, I began to experiment writing and arranging music with various groups. Unfortunately, I ended up with a mysterious hip injury that doctors couldn’t figure out, which would cause me to have intense pain when I played straight-ahead jazz. However, it didn’t hurt much when I played rock, funk, and R&B. Would you believe that it took me 6 to 8 years to figure it out? In that time, however, I had some great experiences with rock/pop/reggae/Afrobeat bands, went through several record deals (Blake Morgan, Skizm, Destroy All Monsters), traveled around the world, etc. After years of physical therapy, biofeedback therapy, Pilates, yoga, and too many other techniques to mention, I am now pain-free and I’m having a great time composing and arranging for both my piano trio, called Trio West, and a sometimes quintet, sextet, or septet called Unit 7.

My new record is called Tobias Gebb And Unit 7—Free At Last. It features some top-shelf jazz heavyweights like Bobby Watson (Art Blakey And The Jazz Messengers), Ron Blake (SNL band, Yerba Buena, Christian McBride), Mark Gross, Joe Magnarelli, Joel Frahm, Stacy Dillard, Ugonna Okegwo, and others. Due to my eclectic background, there are many influences on the record. From hard bop to calypso, and from bossa nova to a sitar-laced arrangement of The Beatles classic “Tomorrow Never Knows,” there are some interesting twists and turns for any willing listener.

My main interest when writing music is to make sure that the melody is the strongest element. Even though there are some great chops and solos on this record, the melody is always king. I can guarantee that you’ll be humming some melodies after only one listen. Some drumming highlights would be the barnburner called “Blues For Drazen,” or the bizarre arrangement of “Softly As In A Morning Sunrise.” (You can listen at the Web sites below.) Have you ever heard a groove that you could swear was an odd time signature but yet it’s only 4/4? The ostinato on this arrangement is composed of dotted quarter notes. These dotted quarter notes can be divided into dotted 8th notes. This makes for some interesting soloing possibilities!

Special thanks to Modern Drummer and all the great drummers out there who have inspired me over the years.