Hey guys, it’s Tim from Season After, writing to you from the road! It’s been a crazy few years for my band leading up to the release of our full-length album Through Tomorrow this past March 23, through DBM/ILG/Warner Music Group. The album features the chart-climbing hit “Cry Little Sister,” and we can’t wait for you to hear it!

I wanted to tell you guys a little about myself and where I come from musically. Ever since I was a little boy I had a fascination for music and especially percussion. My parents would find me besting on the collection of random things I would gather from around the house to construct a makeshift drumset. It wasn’t until I was about ten years old that I got my first chance at the real thing. I joined the school band playing snare drum, and eventually got my first drumkit at the age of thirteen. I was so excited about rushing home from school every day, cranking up the Green Day, Foo Fighters, or Blink-182, and jamming out before dinner and homework! I started with a couple of drum lessons from a friend of the family (who I will never forget—thanks Bobby!), but from there on out I was self-taught. Eventually I drove my parents and neighbors crazy, but less than two years into it I had started my first band with a practice space away from home.

My first band was mostly covers (as I am sure most are), but we did dive into the originals, which I still have recordings of to this day. Those were some of my favorite years—experimenting with new styles and listening to tons of bands, trying to find my own sound. Through high school I played with different musicians and began writing more original material. The better I got and the more I experimented over the years, the better my bands got. Eventually I was playing shows on a regular basis with more than one band at a time.

In 2005 I made a dramatic change in my life and moved back to Wichita, Kansas, my birthplace. Though a job offer landed me there, I quickly ran into Dawson, my current rhythm guitarist, and he told me about a project he was assembling. I was involved in another project at the time, but I was open for anything, and I decided to see where this would take me…. It was a good thing I did!

Seasons After was formed shortly after, and since then it has grown into the rapidly progressing machine that you see today. With the addition of our newest member and shredding guitarist, James, we are heading into a new and exciting era. The styles we incorporate in our music mix metal and rock with melodic vocal harmonies and heavy rhythmic patterns.

I play Pacific drums and DW 9000 hardware, Saluda cymbals, Remo Black Suede heads, Vic Firth 5A sticks, Roland products, and Protection Racket cases. I love all of these companies and their products! Nothing matches the durability and longevity of all my gear.

Thanks, Modern Drummer, for letting me blog, and thanks to everyone else for reading. See you all on the road soon!
For more on Tim Rails and Season After, go to www.seasonsafter.com.

Carl Palmer – Not Slowing Down 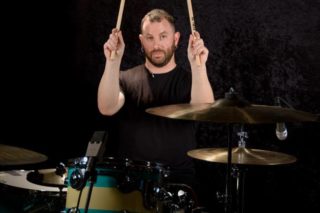 On The Beat with Dave Elitch: Talks New Instructional Course