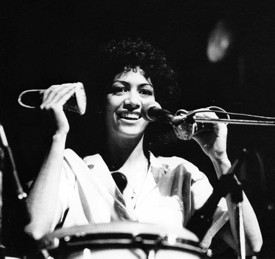 Sheila E, daughter of veteran percussionist Pete Escovedo, developed her natural talent by watching family members and friends gather in her home. Sheila was only eighteen when she carved her spot in music history, playing the hippest of gigs, like sessions with George Duke and Herbie Hancock. Her work with Prince in the ’80s, which included the Purple Rain soundtrack and high-visibility touring, spawned a solo career that kicked off with the record The Glamorous Life in 1984.

Post-Prince, Sheila appeared at the 1996 Summer Olympics; performed at the Oscars with Placido Domingo and in the “all girl” Oscar opening; played at the Thelonious Monk Institute’s Celebration of America’s Music with George Benson, Arturo Sandoval, Herbie Hancock, James Moody, and Jimmy Heath in a tribute to Dizzy Gillespie; and appeared on Babyface’s MTV Unplugged NYC 1997. She also produced and co-composed music for the 1st Annual Latin Grammys, and led the house band on Magic Johnson’s now-defunct television show.

More recently Sheila joined Prince on the Musicology tour; was a featured artist and musical director for her first gospel tour, Sisters In The Spirit; toured with Ringo Starr; started the all-girl group C.O.E.D. (Chronicles Of Every Diva), founded Heaven Productions Music, a music production company that has been hired to direct and arrange music for a number of events including the 2005 MTV Video Music Awards; and continues to devote her time to the Elevate Hope Foundation (EHF), a charitable organization that she founded, which assists the needs of abused and abandoned children through music therapy. And showing the range that she has become famous for, Sheila participated in the third season of CMT’s hit show Gone Country—Sheila was the grand prize winner of the third season, and has gone on to release her first country single, “Glorious Train.”