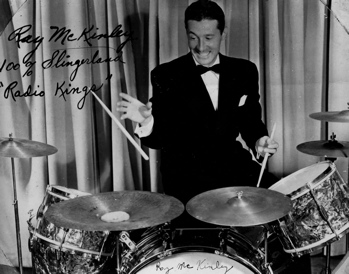 Ray McKinley was born in Fort Worth, Texas, and began playing at the age of four. Though self-taught, he was inspired to play by pit drummer Jimmy Grimes. His career began in the Fort Worth and Dallas areas with local bands, and his first major break occurred in 1926 with the Duncan-Marin band. After working with Beasley Smith in Nashville and the Tracy-Brown band in Pittsburgh, McKinley joined Milt Shaw & the Detroiters at New York’s Roseland Ballroom in 1930. Shortly thereafter, he became a member of the famed Dorsey Brothers Orchestra, and after the two brothers split up, he stayed with Jimmy Dorsey until 1939. McKinley later co-led a band with Will Bradley, had his own band briefly in ’42, and then joined the world-renowned Glenn Miller Orchestra from 1956-’66.

An extremely supportive player, McKinley possessed a natural, flowing time feel and was a masterful timekeeper. According to Cliff Leeman, “Krupa—whose technique and attention-getting devices were so well-developed—got the whole showboat trend going. It was a healthy thing that there were a number of drummers around like Mac, whose work reminded other drummers of what had to be done.”

Jimmy Maxwell, one of McKinley’s bandmates in the Dorsey band, provided another view: “Ray was great at holding the band together. He was authoritative and sensitive. And he really knew how to color and fill in the open spaces. Like Dave Tough and Sonny Greer, he seemed to come up with just the right figure and little touch.”

Finally, Carmen Mastern, guitarist in the Miller band, fondly recalled Ray McKinley: “Mac realized that it was the rhythm section—not any one player—that really was important. A lot of drummers don’t care about the rhythm section. They play for themselves. McKinley seldom forgot why he was there, and what he should do.”