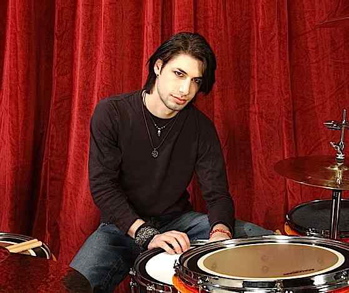 Hello, Modern Drummer readers! I know everyone who writes a blog on here starts it out the same way, but honestly how else are you supposed to do it? I’m sure most of you are scratching your head wondering just who I am; well, obviously I am not a guitarist. I’m a drummer who is here to share a little more knowledge, pass of a few more tricks, and maybe inspire some of you to do great things.

Here is a little bit about me. I was born in Buffalo, New York into a family of drummers, except my father who was, and still is, a renowned luthier. My mother, uncle, grandfather, and several first, second, and third cousins scattered throughout the United States are all drummers. So some would say I didn’t have a choice growing up. I was given my first drum, a Muppets snare, with Animal on it! Around age two I was given a real one, a Remo PTS. I began percussion lessons when I was ten, and joined my elementary school band. Playing John Williams is cool, but I grew up with Metallica, Aerosmith, Guns N’ Roses, AC/DC, and anything else that could be cranked to eleven. So when I was thirteen I set school band to the side and jumped into a trap kit. My first set was a Slingerland, purchased from Buffalo Drum Outlet. Mom said we were going into “just to look around.” What a load of BS!

I started taking private lessons with John Fatta at a local music store. Our relationship has lasted more than thirteen years, and up until this past fall I was still taking lessons from him once a week. I first started playing in rock bands in high school. The typical dreams of being the biggest band in the world applied. Once in college I started working at a mom & pop music store in Niagara Falls, New York. It was during my employment there that I began to branch out and take on session work for other local bands as well as teach private lessons of my own. It was also at this time that some of the local bands I had been playing with started to expand and go out on tours.

By the time I graduated, another musical opportunity knocked on my door. This time is was from the other end of the music world, the business end. I left my little music store and became the artist relations manager for Regal Tip drumsticks. I learned a great deal about the music industry and made some wonderful friendships while with that company, but my passion for sitting behind a drumset was too great. I left the company after only three years to become a full-time musician. I started teaching more and touring and recording with various artists all over the country.

In September of 2009, I moved to Los Angeles, where I continue to teach private lessons and play for some incredibly talented musicians and bands. I wake up every day thankful that I can live my dream. I encourage each and every person who reads this to do the same. Weather you’re fifteen or fifty, if you have a dream, then go for it. It won’t be easy—you’ll be told you’re no good, you’ll be told to give up. But use that as fuel to prove them all wrong.

Tips For The Touring Drummer

Though I have been blessed with growing up around working musicians, trial and error is still 90% of everything you will do. Here are a few tips that may decrease your “error” time.

What to pack: If you are going to be on the road for any more than a week, it’s a good idea to bring at least a week’s worth of clothes. You don’t ever want to over pack. Every city has a laundromat, and you don’t want your band mates complaining that your suitcase takes up too much room. On the opposite end, you don’t want to pack too little. No one wants you to wear the same undies three days in a row.

Gear to bring: Unless you are lucky enough to play large arenas and have a tech take care of everything for you, your twenty-four-piece drumkit may not fit in the band’s trailer. Scale your kit down to what you honestly need for each song. Spare parts and a toolbox are important as well. A backup snare is a must! You never know when you will need to change a snare out in the middle of a set, and believe me, it does happen. A backup pedal is a good idea too, but only if you have the room.

Your toolbox/spare parts box should have everything you will need to keep up regular maintenance for your kit and also fix anything that might break on the fly. These include spare drum keys, screwdrivers, cymbal felts, sleeves and washers, Allen wrenches, gaffer’s tape, electrical tape, pedal springs, lug locks (these are life savers!), pliers, tension rods, and a few multi-clamps. Not all stages and drum risers are the same size, and from time to time you may need to clamp that extra cymbal onto another stand to save floor space.

Extra heads and sticks are a priority, but only bring as many as you know you will need. If you change your snare head every other gig and you play thirty shows, sixteen or seventeen snare heads should work fine. The problem is they can take up a lot of space. If that is an issue, take five to ten snare heads and when you get down to two or three, pick up more along the way. Don’t ever let yourself run out. Being stuck on your last head or pair of sticks in the middle of nowhere USA can end your night real quick.

Living cheap: If you’re a do-it-yourself band, you will have no choice but to live cheap. What little money you make from gigs and selling merchandise typically goes back into keeping you on the road. Staying in a hotel is nice, but that’s all money that could be spent in the event your van or bus has a problem. I have spent many nights, and in some cases months, sleeping in a van. Bring a sleeping bag.

Food is another expense that is unavoidable. Every fast food joint has a dollar menu, but eating that kind of food is very harmful to your body. As a drummer, you need to be in good health. Get a cooler for the van and budget shop at grocery stores. You would be surprised at how well you can eat on a $10/day allowance. The band chips in and buys a case of water, a loaf of bread, and maybe soda. Once these run out, the band replaces them. Each band member is then given $3 per meal. A big $2 pack of lunchmeat will make you four sandwiches easy, leaving you with $1 to buy a 25 cent string cheese or two. Bang! That’s two meals right there, and you still will have $6 for your third meal.

These few tips should guide you to a much more enjoyable road trip and cut down on a lot of the headaches that can happen. It’s easy to catch a cold touring, so take your vitamins!

For more info on Nick Mason, go to www.nickmason.org.