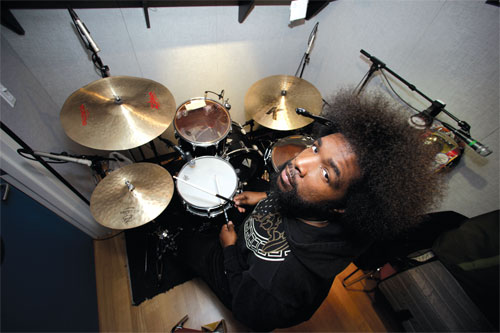 Hip-hop’s greatest band might be spending most of its energies rehearsing and performing on Fallon. But the Roots’ new album proves they’re still an awesome force in the studio. Here Quest, in his own words, gives us the inside dope on his best recordings.

Common featuring Erykah Badu & Bilal
“The Light” from Dave Chappelle’s Block Party
Demonstrates the power of musicians [the Roots] who have played together for a long time, to the point where the song can morph into something else without us even looking at each other. Everyone on stage had been holding jam sessions together for ten-plus years—Bilal would sneak into the club when he was still a sophomore in high school—so this song goes through various phases. It best demonstrates the jam-session vibes that started in my living room back in ’97 and ended on a Brooklyn stage in 2004.

The Roots
“Long Time” from Game Theory
Because of the phase of hip-hop I came in on, the “anything James Brown” era left the station before I was able to get my Clyde and Jabo on. I’m fairly modest about my drumming in all areas except one: I am the heir to the Clyde/Jabo throne. And although somewhat by default, dare I quip that if I wanna be known for any type of legacy, I wanna be known as the funkiest thing walking today. My “Clydeness” (left-hand grace notes) and my “Jaboness” (grace notes with the kick drum) really show in concert, but the sonic quality of my recordings sometimes prevents that loose funk from coming through. That said, I’ll say that “Long Time” is the first time I decided to have a “What would Clyde do”? moment on record.

The Roots
“No Alibi” from Illadelph Halflife
This represents my “cold” phase. After the critically lauded but commercially cold reception of Do You Want More?!!!??!, fingers started pointing in my direction—sounds too “live”…too “soft”…too “alternative”—which means “no cred” in the hip-hop world we had to survive in. You have to understand, we were still hip-hoppers at heart, and only to a jazz musician does critical reception mean more than sales. (We got used to it in time, but back then? Sheeesh.) Because the “hip-hop elite” kept pulling us over and asking for our ID every few miles on the
rap interstate, we decided to make that wait-till-they-get-a-load-of-me, chip-on-the-shoulder album.

I was less worried about non-hip-hop musicians frowning on the cold sound than I was about the hip-hop elite not letting us play in any reindeer games. We were getting pressure on both sides: How is Branford [Marsalis] gonna dig “Clones”? But is the RZA gonna dig “One Shine”? Real musicians cried “Foul!” and “Sellout!” and the hip-hop elite said, “Welcome home.”

This phase was more about engineering and figuring how to get a programmed sound without using machines than it was about drumming. The answer: gating, decaying, and perfect rhythm are your best friends. Cats can gospel roll all they want—I wanna see someone duplicate this exact break with no programming.

Erykah Badu
“A.D. 2000” from Mama’s Gun
The entire Mama’s Gun project was my strangest task as a drummer/producer. My production partner, James Poyser, left the D’Angelo Voodoo tour early to return home to start preproduction on Erykah’s follow-up to her Grammy-winning debut album, Baduism. Because I committed 2000 to staying with D’Angelo—much to the chagrin of the rest of the Roots, who surprisingly got a breath of life with our Grammy win—I had to pretty much contribute to her album when I could: 1 a.m.–7 a.m., and yes, even on sick days.

This is another example of a rare chance for me to pay homage to an unlikely drummer hero of mine: Stevie Wonder. For starters, I grew up listening to Stevie, and you always emulate what you grow up with. And Stevie came up in a time when Motown took Phil Spector’s Wall Of Sound madness to the next level. (On the master reels from the ’60s you can hear three or four percussionists/drummers playing various parts at the same time.) Thus you hear Stevie’s violent hi-hat work on “Love Having You Around” on Music Of My Mind.

When Erykah demoed “A.D. 2000” for us, I thought, Since this feels like Syreeta, lemme pull a “What would Stevie Wonder do”? on the drums. I should also add that I was extremely sick—barf bag, juice, and Kleenex everywhere. My girlfriend at the time was extremely upset that I did Erykah’s session when I should have been getting ready for lobby call (8 a.m.) for the next town. It should also be noted that I fell asleep while drumming. Seriously—you can even hear the point when I woke up; I dropped a stick at 2:56 and used my finger to hit the ride cymbal until I found another stick in the dark. Because of the angry eyes I was getting from the ex, I decided to keep that bit of info to myself until the album was way mastered. I did this once before, on a gospel song Raphael Saadiq and D’Angelo were making for Voodoo. Somehow I can drum and snore at once!

D’Angelo
“Greatdayndamornin’/Booty” from Voodoo
Asking me for my favorite moment of D’Angelo’s Voodoo is the hardest task ever. I will say that the original music was light-years behind what you hear on the final album. (He changed everything but the drums.) The “Booty” portion (5:37) is my favorite part. We were just messing around, playing the Sesame Street theme. I came back a month later, and he kept the drums the same and made it into an interlude. I gotta say that this particular interlude is my rawest, stankest performance on wax. And the fact that our engineer showed me how he got that dirty sound made me explore all the sonic texture options shortly thereafter.

The Roots
“You Got Me” from Things Fall Apart
The song that I get the most compliments on is based on a song demonstrating a style that I’m barely known for. Most people wonder why I did the drum ’n’ bass homage at the end. We moved to London in 1994, and drum ’n’ bass was all the rage then. D&B is pretty much the sound of Clyde Stubblefield’s drum solo on James Brown’s “Soul Pride” played back at a higher speed. The effect is hypnotic in a club, and back in ’94 all the clubs in London were under the spell. We were friends with the proprietors of that particular movement—U.K. production team 4hero—and wanted to send ’em a lil’ shout-out. Little did we know this would win us a Grammy and that the future gods of arthritis would forever haunt me.

Pharrell & The Yessirs
“How Does It Feel”? from Out Of My Mind
One day in September of 2006, at 4 a.m., the Neptunes’ Pharrell Williams asked James Poyser and me to remix his entire debut album, carte blanche. We more or less gave him a face-lift and tucked and lifted what was already there. This particular cut took its rhythm spirit from the Jimmy Castor Bunch’s B-boy classic “It’s Just Begun” and the last minute of the Afro breakdown on Michael Jackson’s “Don’t Stop ’Til You Get Enough.” Although the album isn’t available for retail purchase, you can scour the Net and find copies. This is one of the rare times I play 16ths on the hi-hat with both hands.

Fiona Apple
“Not About Love” from Extraordinary Machine
My biggest honor of 2005 was meeting one of my favorite artists: Fiona Apple. She was so shy about asking me to play on her album, but I couldn’t have been happier. We spent the day at [bassist/producer] Mike Elizondo’s house and worked on a lot of songs. Then she played me a demo of “Not About Love,” and I was floored. I insisted on being a part of this song, only to be told it was already recorded. I still didn’t care, and sure enough they let me have my way. The most shocking revelation is that the song was already recorded without a click track. And with all its skips and time signatures, I was in for a nightmare for sure. Swear to God, I nailed it on the first take!

Prince with Musiq
“If You Want Me To Stay” from One Night Alone…
Although nothing extraordinary, I can at least tell my kids there is proof of me, Larry Graham, and Prince jamming on Sly Stone in a New York club.