Hey, kids, Jimmy Keegan here. So it was a little over ten years ago that I received a call for a session. The writer/producers were frustrated because they were trying to track some songs for a legendary artist and so far the rhythm sections were proving to be a little generic. Great players, but nobody was taking any chances. So along with the great Mike Porcaro and percussion legend Luis Conte, I took a stab at these songs. We asked all the right questions, and after making a few little changes the songs took shape and the writer/producers were extremely happy. When the artist received the demos, he was so pleased he decided to keep all the demo tracks for the album. The album would go on to win nine Grammys and sell over twenty-five million copies. The artist was Carlos Santana and the album was Supernatural. This year marks the tenth anniversary of this historic recording.

The Supernatural Legacy Edition includes the original CD remastered (and it actually does sound better) plus a second CD of some of the unreleased material from the original sessions. I play on “Primavera” from the original CD and “One Fine Morning” on the second disc. Mike and Luis play brilliantly on both songs and were, as usual, an honor and a pleasure to work with.

This year will also see the release of the tenth Spock’s Beard studio CD. For those of you who don’t know, I’m usually the band’s touring drummer. Nick D’Virgilio plays on all the studio stuff, but for the last three CDs Nick has also been the singer (not to mention doing guitar and keyboard work as well). When Nick took over the vocalist spot, I was asked to join them on drums for the live shows. This new studio album will have a slight change. I was asked to help out on some vocals. The songs sound great and I’m sure this will be their best release so far. A tour is in the works, and I have my work cut out for me. Nick has played some ridiculous stuff and now I’ll get to play it live.

2010 is also special as it marks my twenty-fifth year with both Tama drums and Paiste cymbals, and I couldn’t be happier. The drums Tama is producing are simply the finest on the market today, and Paiste has the strongest lineup, hands down. From the Signature and Dark Energy lines to the Alpha series, every cymbal sounds fantastic. The entry-level products from both companies are professional quality. I’m proud to be a Tama and Paiste artist.

Lastly, look for new releases from Rahsaan Paterson and new artist Steve Bonino to hit soon. I’m producing and mixing this one as well. If you’d like, go to www.aquariandrumheads.com and click on my artist page for some audio and video stuff. And keep watching www.tama.com for a full feature including an interview and some playing. That should be up sometime this month.

For future updates, check back with Modern Drummer or go to my Web site www.jimmykeegan.com. You can also check out the usual www.myspace.com/jimmykeegan. I have some audio and video there as well. Thanks! 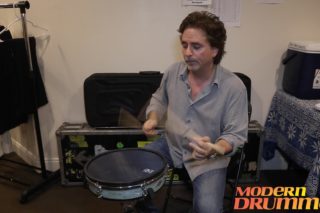 Warming Up With…Todd Sucherman
Video and text by Miguel Monroy