For eighteen years, Kiss’s drummer has helped his world-famous band stay in our hearts and on the radio by doing what he does best—being himself. In this special online extra from his May 2010 MD cover story, we begin by asking Eric about… 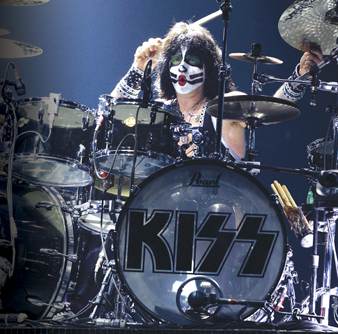 In 2004 we did the Rock The Nation Tour, and then we didn’t do any kind of full-length touring until last year in Europe, and that’s where we really noticed the resurgence. All those shows did extremely well for us, and we noticed the age demographic had completely changed. All of a sudden there were a lot of young kids, and when we’d ask, “Hey, how do you know about Kiss”?—thinking that maybe their parents were Kiss fans—a lot of them said, “We found you on the Internet through YouTube”…or through Guitar Hero…or Rock Band. So it’s the kids themselves discovering Kiss. And next thing you know, they go out and buy the CDs or videos. And then next thing you know, they want to come see the band live!

I look back now at all the drummers who’ve attained longevity in the music business…it’s not an easy task. Being a journeyman musician is different from being in a band. If you’re not a songwriter, or you’re not the principal owner of a successful band, to survive in this business is very hard work. A lot of drummers talk in interviews about their workout regimen and “I’m working on this ostinato thing where I’m playing this with my left hand,” and that’s all great and fine. But the majority of people will never be able to use that kind of technical ability unless they create some kind of niche for themselves. Ultimately most players just want to have a career in music, whether it’s as a studio musician or being in a band with some success, where they can just play for a living.

It’s almost like a rare art form to be able to play music for a living. And the way people view musicians in America is different from the way they view them in Europe. Overseas they look at dance and theater and music and all that as a cultural and artistic expression, and they really support and admire it and respect it in a different way. Jazz musicians are totally revered in countries like Switzerland, Belgium, and Germany.

When people ask me for advice about being in the music business and making a living, I tell them that you’re on not only a financial roller coaster but an emotional roller coaster as well, and you have to always remember that it is a business. Everybody is aware that musicians look at their art as being a part of our cultural fabric and that we are very emotional about it. Unfortunately, a lot of businesspeople are very aware of that. The best way to take advantage of people and situations is to tap into their emotional side, knowing that they’re not always going to make decisions based on logic. A lot of times the business can prey on that. I don’t want to sound negative; I just try to be realistic. There are some very, very shrewd people in the music business, and I think if you’re not business-minded you’ve got to remember, no matter who you’re working with—even if it’s the best friends you grew up with—the minute you throw some fame, success, and money into the equation, you will see people change. Not everybody—some people do retain their humbleness and their roots. But you have to be aware.

I watched bands on TV, and I saw many on Ed Sullivan’s show. I went to see concerts, I saw Led Zeppelin one time—so I did get to see Bonham live! I never got to see the Beatles or Jimi Hendrix with Mitch Mitchell or Cream with Ginger Baker. I was a little bit young for them. Even though I was aware of all that music because I had an older sister and brother, I only got to experience them on TV or on records. These days anyone can buy DVDs or watch performances by just about anyone on the Internet. Years ago, when I saw Tony Royster Jr. at twelve playing like Dennis Chambers, I was like, “Forget it, it’s over.” [laughs]

I remember another guy, Thomas Pridgen, coming to the NAMM show with his grandmother when he was a little boy. I used to talk to him all the time. He’s another one who has turned into a monster player. His grandmother made it her mission to help her grandson achieve his dreams. But she also taught him how to be a nice, respectful person. She is a great lady, and I give her a lot of credit for the success he’s had, because you need support factors in your life. My parents were both musicians. My mother played viola and sang, played a little piano too, and my dad played violin and saxophone and was a bandleader. And I started playing in my dad’s band when I was fourteen.

My dad also took me to see big bands all the time. To this day Buddy Rich is my favorite drummer, and he always will be. It’s tough to name the best all-around drummer, because what each person does is different. And I always like to think that if you play in a band and you do your thing, it’s not about who is better technically. What’s more important is who is right for the situation. I know guys that can play circles around me all day long, but they’re not the right person to play in Kiss. They might not have the right chemistry to work with Gene [Simmons] and Paul [Stanley], or maybe they don’t sing; there are a lot of factors to fitting into certain situations. It’s not just about the drumming.

But getting back to who some of my favorite drummers are…in my opinion Vinnie Colaiuta is probably the best all-around drummer today. If we have a modern-day Buddy Rich—if you want to use that term—a guy who we can say sets the bar and everybody else is a notch below it, that person to me is Vinnie. He can play anything. He played on Megadeth records, with Faith Hill, and he’s played with Frank Zappa, Jeff Beck, Sting…and he does it all well.

I love Dennis Chambers because I think Dennis is like Vinnie—a drummer who can go in and play with a fusion band and floor you, but at the same time he can just play a straight-ahead groove. I’ve seen Dennis play in a jazz trio at a little jazz club with a traditional kit, not play double bass, just old-school bop. And then I’ll see him playing fusion with Niacin, then real pocket stuff with Santana. Simon Phillips is another; he always has that real smooth groove, and his drums always sound good. He has a certain sound that he gets, and he’s really good about knowing how to pull that sound out of his drums. A lot of the sound is how you hit the drums and how you play. Steve Smith is another one that comes to mind who can play anything.

A lot of people don’t realize that Paul and Gene are really good musicians. They’re very underrated and don’t get the credit they deserve. And I’m not saying this to defend them or stick up for them; I’m just saying the truth from my experience. Gene is a great bass player. And Gene and Paul are music aficionados—Paul in particular is like a walking music encyclopedia. He can name the most obscure song and tell you who sang it and when it came out.

To be honest, I like both. I look at them as two different animals. I’ll never forget the first time I did a gig with Kiss in makeup. It was in 2001. The show was in Japan and Ace was still in the band, and it was surreal, like an out-of-body experience. I was like, “I’m on stage with Kiss, and I’m the drummer!” Mind you, I had already played in the band without the makeup, so I wasn’t like a star-struck fan. But we’d gotten to Japan late, so we never did a production rehearsal. I never had the makeup on, other than for a photo shoot, so when I walked out on stage with the makeup, that was for the first time! It was so trippy and a very cool situation. Be careful what you wish for, right? [laughs]

Now, trust me, I don’t feel like someone handed me a winning lottery ticket either. In life you go through a lot of ups and downs. Sometimes learning how to survive is as important as learning to play. And I never had a drug or alcohol problem—I watched other people around me, and it taught me that wasn’t the path to go down. Life in general is about learning how to survive. Anyone in the arts can tell you it’s not easy. Unfortunately a lot of times you’re not going to be successful or you’re barely going to get by, but you live and learn. Maybe you’ll get a job behind the scenes and can still be in the business. The main thing is you have to persevere. If you want to be a musician you have to be smart enough to learn survival tactics and be business-minded so you can make a living. I don’t want to be a “great” starving artist; that’s not attractive. Remember, I’ve been in and out of Kiss three times in eighteen years. So I’ve learned that nothing is forever. But anything is possible, and I feel very blessed.

For more with Singer, check out the May 2010 issue of Modern Drummer. Visit Eric’s Web site at eric-singer.com. And for more on Kiss, go to www.kissonline.com.