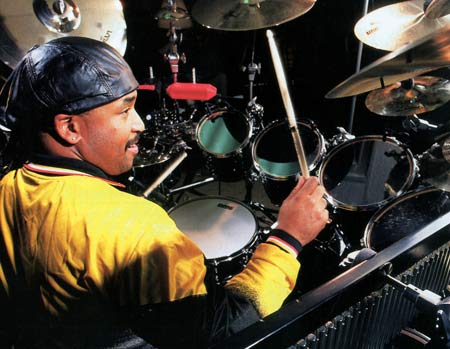 “Basically I grew up on pocket,” said Carter Beauford in his 1998 Modern Drummer cover story. “When it comes to music, that’s the bottom-line rule for me. Growing up, the jazz influences were there as well, but don’t forget there’s a pocket to jazz too. I’m at a point now where I want to get that into our music in the heaviest way possible.”

In the fifteen-plus-year history of the Dave Matthews Band, Beauford has done just that, and a whole lot more. Check out the drummer’s playing with the genre-crossing group—creative ideas combined with tremendous technique, over-the-top wailing executed with pinpoint control, all rolled up in the groove of death. It’s simply an awesome combination that has drummers smiling as they race to the woodshed.

The Dave Matthews Band’s rise to prominence—and Carter Beauford’s—began in Charlottesville, Virginia. It was a fairly slow climb, as Beauford, singer/guitarist Matthews, bassist Stefan Lessard, violinist Boyd Tinsley, and sax player Leroi Moore learned how to blend their disparate musical backgrounds together. Rock, pop, bluegrass, R&B, country, and jazz could all be found on these bandmembers’ résumés. With Beauford as its fusion/funk foundation, the Matthews Band grew into a solid, style-hopping quintet that eventually wowed audiences on an international level.

All of the success—both musical and financial—hasn’t affected Beauford. His infectious, Cheshire-cat smile can light up a room. His down-to-earth, affable style reveals a man at ease with himself, although his conversation shows a deep devotion to developing his craft. It’s that warm, gregarious personality reflected in his playing—along with all of those terrific chops—that makes Carter Beauford one of the all-time greats.