Hey, y’all! Thanks for taking the time to read this. I’ve been playing drums for about eleven years and have been in many bands. For the last few years I’ve played with Alesana, a screamo/hardcore band that combines pop essentials with a lush metal and screamo dynamic. I’ve toured the world and played thousands of shows to thousands of fans and sold a fair share of records in the process. But it wasn’t always like this, and everyone’s got to start somewhere.

Drumming has been in my blood since before I can remember. Born to two musicians and raised around music, I had a favorite song (“Maxwell’s Silver Hammer” by the Beatles) and sat behind a drumset before I could fully pronounce words. Growing up, music was something that we just had in our household. We’d listen to records every night while we cooked and ate dinner together. Everything from U2, Jimi Hendrix, and Led Zeppelin to Aretha Franklin, Robert Johnson, and Captain Beefheart to Jeff Buckley, Morphine, John Coltrane…the list is as long as it is varied, and between this and watching my parents’ band practice in the living room and going to their gigs when I was old enough, music was all around me.

When I finally got a drumset I took lessons for about three years and practiced every day out of books and to records. Over the next few years I played in a handful of bands and at open-mic nights with the blues and rock heavy hitters in town. Playing on stage with older cats who, in most cases, have been playing longer than I’ve been alive really taught me a lot. Learning how to follow cues, play through changes, and improvise on stage has been invaluable to me in every situation I’ve played in.

I went on tour for the first time when I was sixteen, sometimes sneaking into clubs I wasn’t allowed into and spending all the money I’d saved up to get to the next city. These weeklong jaunts turned into a full-time job when I joined Alesana, two weeks before the first record was recorded. I learned twenty-something songs in just over two weeks, played two shows, and recorded the first record in about a month’s time. When I left to tour after that, I didn’t come home for eighteen months. All that hard work paid off, and now we’re on our third record (The Emptiness, released on January 26) and about to embark on another round of world touring. And there are no signs that we’re slowing down anytime soon. But I still think back to the days when I was banging on shoe boxes in my bedroom from time to time, and I still listen to some of those records that shaped my musical brain. I’m proud to have come this far, be part of this amazing band, and have such great fans who support us.

The gear I use is amazing, and I’d like to thank Truth Custom Drums, Zildjian, Vic Firth, and Evans for making such great products and making touring life easier. And thank you all for reading!

For more on the band, visit www.myspace.com/alesana. 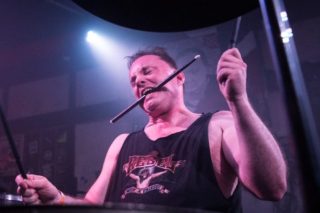 On The Beat with Scotty Irving of Clang Quartet and on Tour with Ariel Pink: Talks Theatrical Performance Art

Temim Fruchter of the Shondes