Hello, Modern Drummer! I’m writing this blog on the stickies application on my iPhone, on a plane flying from Philadelphia to Denver with a two-hour layover in Chicago. Ahh, I hate fly dates!

My band, Push Play, is on our Midnight Romeo tour, supporting our single by the same name, which recently debuted on pop radio charts at number thirty-six and has steadily been moving up on Billboard. This past year has flown by, with the completion of our album, a move to California, a record-deal signing, and all these shows and tours.

Our first full-length album, Found, came out this past September. We played East Coast (Irving Plaza in NYC) and West Coast (the Roxy in L.A.) CD release shows. Both went great! The CD was released about thirteen months after the early stages of preproduction, and I’m very proud of the songs and my playing. The drum tones on the record are untouchable; I had the legendary Artie Smith tech on the tracks recorded in the East and Ross Garfield from Drum Doctors tech in the West.

We used three producers (Matt Squire, Kurt Snyder, and Valentin), two mixers (Serban Ghenea and Chris Lord-Alge), and Ted Jensen for mastering. So far the album has reached the top twenty on the iTunes pop charts. Matt Squire produced our first radio single, “Midnight Romeo.” It has an urban-grooving sort of feel in the verses and a rockin’ chorus. We shot the video for that several months back in Nashville, and it features scenes with label mate Emily Osment.

Last April the band and I moved to Santa Monica, CA, for several months to finish recording the album, shoot a Webisode series, and just kick it on the beach. It was nice because it meant less flights overall (we’d been flying out there several times a month). We basically lived in a huge frat house overlooking Venice Beach and the Santa Monica Pier; it certainly beat living in a tour bus, airport, hotel rooms, etc.

While I was out there, I had the pleasure of taking lessons from the legendary Wings drummer Denny Seiwell (thanks to MD’s Billy A). I learned so much studying with Denny. He didn’t teach me chops, how to build up speed, or hand technique–he taught me how to always think and play musically. It was the best feeling in the world to be playing a groove with him and to hear him call me not only a “great drummer” but also a “musician”! He’s been involved in so many projects over the years with all the greats and has played on so many tracks that have influenced all aspects of music today.

Also, while we were living in Cali we signed a record deal with Wind-Up Records. They FedEx’d us the contract from Manhattan, and we overnighted it right back and then had a nice celebration that evening at the house. The label has kept us on our toes since the signing. At the end of our stay in Cali they had us on the road, and we ventured out on a two-month radio promo tour with nothing but acoustic guitars and my Kotz cajon. Wind-Up has regional reps across the country, so each week we would meet up with a different rep and they’d take us to every Top 40 radio station in each of their assigned markets. This tour consisted of two flights a day and constant traveling in Enterprise minivans–but hey, it paid off! It’s surreal to be cruising in your car and have your song pop up on the radio.

So September was filled with plugged-in radio-show fly dates; they were awesome! The most memorable of these shows was in Louisville, Kentucky, where we played for 14,000 screaming fans. There’s nothing like playing for that many people singing all the words…and there’s nothing worse than the feeling of playing for that crowd with a horrible rented backline. I learned my lesson and now always travel with my Ludwig Black Beauty Super-Sensitive snare drum, DW 9000 double pedal, spare heads, and a set of Sabian AAX and HHX cymbals.

This is our third national bus tour, and so far it has been great. We’re on the road till December. I’m lucky to have such good relationships with the companies I endorse. SJC has hooked me up with an awesome lit-up acrylic kit: 26″ kick and 13″, 16″, and 18″ toms. Vater couldn’t treat me any better, and there’s nothing like their powerhouse sticks. Sabian has hooked me up with amazing-sounding cymbals; I’m particularly fond of my 20″ HHX O-Zone crash. And Evans has the most consistent, best-sounding drumheads around. And to Modern Drummer, thank you for the opportunity to write my second blog!

All in all this past year has been a blast. I’ve never taken anything for granted, and I acknowledge how lucky I am to be traveling the world, doing what I love as a full-time job, and being surrounded by great individuals in the industry, learning valuable lessons every day. Hopefully we can keep building on the foundation and make our career as musicians last for years and years, accompanied by great success.

Okay, I gotta go–the flight attendant is yelling at me to turn off my phone…Colorado, here I come!

Thanks, and take care, everyone.

For more on the band, visit www.pushplayrox.com. 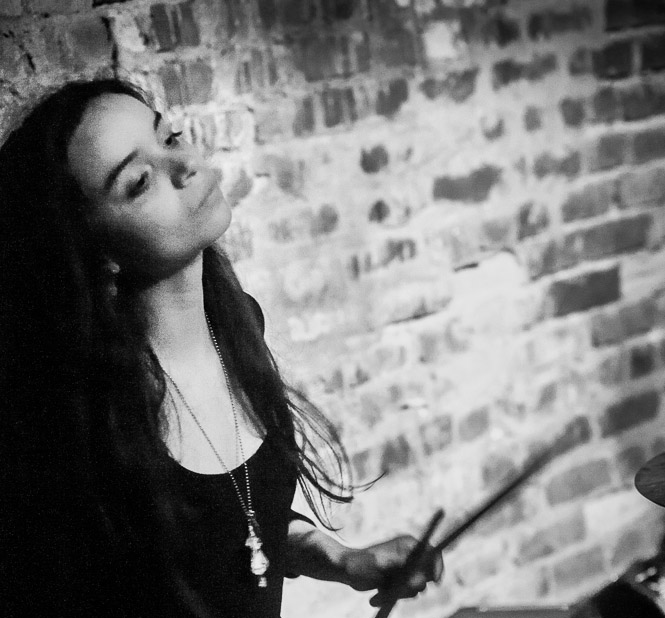 Rachel Trachtenburg of the Prettiots and Larry & the Babes