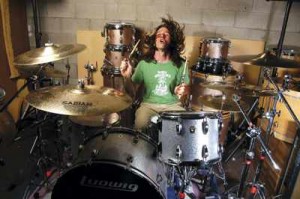 Talk about trial by fire: Several years ago, when drummer Scott Reeder landed the gig with the heavy rock quartet Fu Manchu, his first release with the band wasn’t a proper studio album where he could punch in parts and run several takes. Rather, thousands of Fu Manchu fans were left to decide on the drummer’s qualifications while listening to the aptly titled live recording Go For It.

These days Reeder’s comfortable enough with his gig to throw down solos at shows. “You’ve got to arrange a solo to have a definite beginning, middle, and end,” Scott says. “But don’t make it too long, because there’s definitely a propensity for people to go get a beer during that part of the show!”