Mick Fleetwood is held in high regard as a drummer for outfitting his band’s songs with hypnotic grooves in various forms. Think of the hollowed-out verses of “The Chain,” the delicate brushwork of “Sara,” and the steady pulse of “Dreams.” When the chorus of Rumours closing track “Gold Dust Woman” enters, however, the other side of Fleetwood’s rhythmic genius is on display: his penchant for playing patterns of accents where you least expect them, and rarely duplicating those figures when a section repeats. 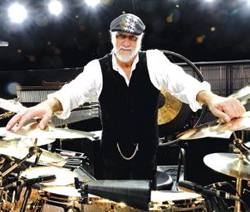 Mick says that habit developed from a difficulty in consistently committing things to memory. And he’s well aware that other drummers have driven themselves mad trying to approximate his unorthodox style. “Some of the drummers that play with Stevie when she goes out on her own, they’ll say, ‘When I play your parts, it just sounds so stiff and weird. It’s driving me crazy,’” Fleetwood says with a knowing laugh. “I tell them it was just the way I felt it and I can’t really explain it. With me, it’s back-to-front sometimes.”

While he’s celebrated by fans and fellow musicians for providing such unique rhythmic counterpoint to the gilded pop songs of Lindsey Buckingham and Stevie Nicks, within the ranks, Fleetwood, sixty-one, has always been much more than just the band’s drummer, or founding father, or partial namesake.

From Fleetwood Mac’s inception as a blues-based London combo back in 1967, Mick has been the straw that stirs the drink. He acted as de facto road manager in the early days, drafted new members as original guitarist-vocalist Peter Green and replacements like Bob Welch left the fold, managed the band’s affairs when things blew up in the ’70s, and kept his group afloat in the ’80s and ’90s after Buckingham and Nicks temporarily departed.

Throughout it all, Fleetwood has had bassist John McVie (the “Mac” in Fleetwood Mac) at his side to form one of the greatest rhythm sections in rock history. And well into his fifth decade as a working drummer, he’s feeding his desire to have a regular gig with two bands he formed with former Mac guitarist-vocalist Rick Vito–The Mick Fleetwood Blues Band and The Island Rumours Band.

Today, the Mac is back (albeit minus retired keyboardist-vocalist Christine McVie) and is well into a reunion tour that should keep the band on the road throughout 2009 and might inspire the members to enter the studio in the not-too-distant future. “I truly believe that during this tour Stevie and Lindsey will be thinking of ideas for a new Mac record,” Fleetwood says with palpable enthusiasm. “This band feels we’re more than capable of doing that. If I was put on the spot and asked to bet on whether it would happen, I would put money on this band definitely recording again.”

MD: When you wrapped the last tour in 2004, was there any certainty that Fleetwood Mac would work together again?

Mick: There was, it was just a question of when. In truth, we thought we’d have been doing this three years ago. But it had to be right for everyone. Otherwise it would just suffocate something that someone’s doing. Lindsey’s solo projects took way longer than he thought. And Stevie went back out on the road, so we waited. Everyone is totally focused instead of sort of focused. So it’s worked out better.

MD: What are some of your recollections of the early days gigging around London?

Mick: My first official gig in London was with a band called The Senders. They were basically an all-instrumental group. And out of that band came The Shames, which did fairly well around London. We played at The Marquee, doing Yardbirds-esque stuff. From there came my connection with keyboardist Peter Bardens, who I played with for many, many years. I went on to play with him and Rod Stewart in Shotgun Express, and with all sorts of people. I was very fortunate that once I got to London I was never without a gig. I never had any downtime when I wasn’t playing. That situation really helped my chops.

MD: Did you have lessons or any kind of training before you started gigging?

Mick: No, it was training on the job. Though I was playing to records in the attic when I was a young kid, about nine or ten. I had a toy kit called a Gigster. Each drum was about 6″ deep, and it had a 6″ cymbal, a hi-hat, and a bass drum.

MD: When you were playing around London in the mid-’60s, were you rubbing elbows with up-and-coming drummers like Ginger Baker?

Mick: I didn’t really know anyone, but I very quickly knew of them. They were all drummers that commanded a lot of reverence, like Ginger, and Phil Seamen, who used to play with Georgie Fame. He was a great English jazz drummer. Ginger used to worship him. And I first knew of Ginger from playing with the Graham Bond Organisation–that was a wild band. And Mickey Waller [Jeff Beck, Rod Stewart, Brian Auger, John Mayall] I really admired. Great feel drummer, one of the dudes. He was like the English Jim Keltner–played with a lot of people, but he still retained his own style.

MD: When did you hook up with John McVie?

Mick: I hooked up with John playing-wise with John Mayall’s Bluesbreakers. I knew him as a sort of wayward friend. We’d played on so many gigs in and around London, at places like The Flamingo and The Marquee. When I hooked up with Mayall it was John Mayall, Peter Green, John McVie, and me. So unknowingly, the first three members of Fleetwood Mac were in that band.

MD: I would imagine you and John could roll out of bed in the middle of the night after having not played together in a decade and fall into that boom-bap/boom-boom-bap groove without a problem.

Mick: You are entirely correct. [laughs] We all don’t see that much of each other when we’re apart–John and Lindsey had probably seen each other three times in five years. And Lindsey, bless his heart, like the second week of rehearsals, literally, he had tears in his eyes, saying, “Shit, I forgot about you guys.” He was saying, “I get what we have in this band.” No matter the blows that come and go personally, musically, when we’re all together, it’s for sure a trip.

MD: You also have a tight rhythmic link with Lindsey that feels a little more primal than the way you lock in with John’s bass. The way you and Lindsey often jam into “Go Your Own Way” live is a good example of that.

Mick: You’re right. I play very physically. And when Lindsey’s on stage he’s also pretty physical, in terms of how he gets his stuff over. We have that sort of camaraderie. He knows he can turn around to me and he’s going to get his ass kicked. And he can do likewise with me. That’s how we communicate musically. With John, I don’t have to think about what he’s playing, and he doesn’t think about me. We’re so blended into one, it’s second nature. I can go off and have fun and play off Lindsey, and John’s always right there with us.

MD: It’s certainly an interesting contrast of styles. There’s Lindsey, who’s more of an eccentric, studio-rat perfectionist type. And there’s John and you, who bring an old-school blues approach to the table. On paper, you wouldn’t think that mix would work, but it does.

Mick: John and I deliver something that may not be everybody’s cup of tea, but generally–which is a nice thing–people acknowledge that it’s a rhythm section that is very identifiable. I’m only saying that because I’ve heard it so often. For Lindsey, when he’s away from that, playing with other players who do their thing and approach things differently, it takes a few days for him to come around. I could see it on his face when we started rehearsals. We were doing some of our songs that he had been doing on his solo tours, and I could see him thinking, That ain’t gonna work with these two…. [laughs] But slowly, the big smile would come, and he’d realize that’s the stuff that Fleetwood Mac does.

John and I play like blues players, really, in terms of the way we approach things. It’s not the material we’re doing. But the approach John and I have was learned in the trenches playing with Sonny Boy Williamson. It stays with you. I’m not Gene Krupa. When all is said and done I’m just a guy who gets out his own emotions though a pretty simple formula of technique. I pride myself on time and I pride myself on knowing that if something is digging a hole or not swinging, I’m not playing well. It’s that simple. Has it got the grease? If not, give me a can of it, and let’s deliver this shit–properly.