Hello, MD readers! As of late, I’ve made the move from Chicago to Nashville to continue my growth in the biz. Things have been moving at breakneck speed since then, which is so great to say given the economy that we’re in.

I’ve been touring with rising Southern rock/country artist Stephen Cochran, who’s signed with Aria Records. We just picked up this bus that we dubbed “the Captain Americamobile” because of how it’s wrapped–it’s one big rolling American flag with Stephen’s name and picture all over the place, sponsored by the Coalition To Salute America’s Heroes. It’s so cool and a privilege to be with Stephen and the coalition! Keep on the lookout this summer on GAC and CMT for the video of Stephen’s new single “Wal-Mart Flowers.” Yours truly will be in it as well.

I’ve also been doing a good chunk of session work in Nashvegas, cutting some tracks for Warner Bros. artist Scott Lindsey. And I’m doing demo sessions, plus a few product demo sessions for one of my endorsers, Earthworks Microphones.

I’m playing some shows with an up-and-coming artist out of L.A., Larry Bagby. Just did a show with him in El Paso on March 6–what a fun gig that was. He’s also a country guy, more the Johnny Cash style, which is right up his alley since he did in fact play the bass player of the Tennessee Three in the movie Walk The Line starring Joaquin Phoenix and Reese Witherspoon. I’m also doing a show with Toby Keith’s lead guitar player, Rich Eckhardt, in Franklin, Tennessee. It’s more of an instrumental rock/fusion gig. That’ll be a lot of fun, seeing how I don’t get to strap on my fusion boots that much since the move. But Nashville isn’t just country–I’ve been called to do jazz, Latin, rock, funk, blues, and many other genres of music there. It truly is the “Music City.”

Outside the country world, I have a new album out. It’s a project with Dennis Ostermann on piano and me on drums–that’s it. The name of the album is White Room Sessions: Improvisations For Piano And Drums. It’s definitely in the avant-garde jazz/art rock world. In my opinion it’s by far the best example of my playing that has been captured on record, and one of the best drum sounds I’ve ever heard, thanks to Dennis’s engineering skills in the studio. I’ll list the links below. I hope you all can check it out and give me your feedback since it’s something completely new for me.

I just wanted to take the time to thank my endorsers for their continued support; I couldn’t do it without them. Not only are they great companies that make great products, but every one of the guys and girls I know at these places are the best people in the world. Thank you to Yamaha Drums, Paiste Cymbals, Aquarian Drumheads, Vic Firth Drumsticks, Earthworks Microphones, Power Wrist Builders, Hear Technologies, and SKB Cases. All you guys keep me rolling down the road with the best stuff out there! God bless you all!

Thanks again, and happy reading. Please feel free to send me comments, questions, and good jokes!

The new album White Room Sessions: Improvisations For Piano And Drums is available at www.dennisostermann.com, www.cdbaby.com, and www.digstation.com. For more on Chris, check out www.myspace.com/chrisinfusino and www.chrisinfusino.com. 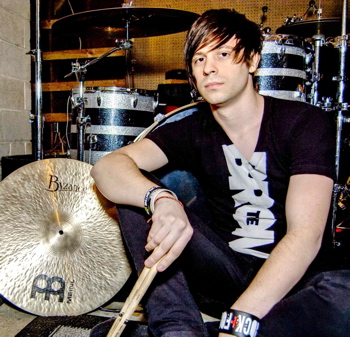