German drum star Benny Greb has a lot to talk about these days. Not only has he been steadily climbing the ranks as one of the world’s premier clinicians–he’s been a huge hit at major industry events including the Cape Breton and Montreal Drum Festivals, Meinl Drumfest, Australia’s Ultimate Drummer’s Weekend, and the prestigious Percussive Arts Society International Convention–but Benny’s also kept himself extremely busy teaching, writing and producing his own music, doing sessions, and touring with various bands from Germany and Europe. 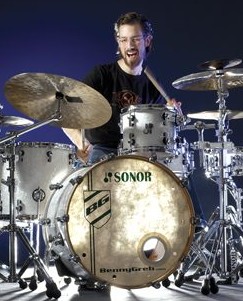 The twenty-eight-year-old drummer has been such a workaholic that he decided to put aside the first three months of 2009 for some personal time, which he spent hiking across the countryside of New Zealand with his girlfriend. “For the past eight years, I’ve had no more than three or four days off, so I’m squeezing in as much vacation as I can before getting back to nonstop work,” Greb explains from a Southern California hotel the day before disappearing into the land of The Lord Of The Rings. When he returns home to Hamburg, Benny has very little time to reflect before hitting the road for a six-show tour with the funky guitar trio Jerobeam, a month-long excursion with the German singer-songwriter Stoppok, and a lengthy run of clinics and appearances promoting the release of his incredible two-disc instructional DVD, The Language Of Drumming: A System For Musical Expression.

In the beautifully produced Language Of Drumming, which was filmed in a variety of gorgeous locales from the Swiss Alps to a Bavarian forest, Greb outlines a systematic yet creative practice method that draws a direct correlation between the essential elements of drumming and the basics of spoken language. In the opening section, Benny explains a “rhythmic alphabet” that consists of all of the possible 16th-note and triplet subdivisions within one beat. The first lesson involves clapping each “letter” of this alphabet while singing a quarter-note pulse. The drummer then takes viewers down a clear path toward complete musical fluency by demonstrating how rudiments and various stickings can be applied to the “letters” of the alphabet to form “words” and “phrases.” Disc one concludes with a captivating discussion/demonstration (in the Syntax chapter) that shows ways to use the basic vocabulary in odd-note groupings to create more advanced, tension-filled phrases.

The second DVD puts technique aside and focuses on creativity and musicianship. Here Greb offers logical exercises for practicing improvisation, as well as demo segments on ways to explore different drum sounds and specific systems for developing a strong sense of time. Benny closes his three-hour lesson with an incredible open solo that perfectly illustrates how stunning displays of technique can be simultaneously musical, tasteful, and emotionally thrilling.

The night before he left for his three-month sabbatical, Benny sat down with us for an hour so we could dig a little deeper into some of the fresh drumming concepts he presents in his DVD.

Benny: I started preparing the DVD about three years ago. The material is a combination of things I’ve come up with over the past ten years mixed with great systems that I picked up along the way.

MD: What inspired the idea of breaking down drumming in a way that’s similar to how we learn to speak languages?

Benny: Early in my career, I would get frustrated because I wasn’t able to express myself the way I wanted. I didn’t want to play one-bar fills exactly the way I prepared them each time. Playing that way is similar to what happens when you use one of those cheap foreign language books to learn basic sayings. You learn something like, “Can you tell me the way to the train station, please”? But you don’t really know what you’re saying. If the other person doesn’t answer you like it said they would in the book, the conversation can’t go any further. Many drum instructional books and DVDs function that same way. They try to give you licks that always fit, like, “Play this fill for a Latin song,” or “Here’s the rock groove.”

In real life, you have to bring much deeper knowledge, experience, and sensitivity to every situation. So I developed a system that’s like learning a language–in terms of defining letters, words, grammar, and syntax–so I could express myself freely on the drums. It’s similar to what happens when I say the word say. I don’t need to think s-a-y. I just feel the word and say it. I’m using letters to create words that express an emotion. I wanted to develop a similar emotional connection in my drumming. After all, music is a language. It can make you laugh, it can make you sad, or it can make you dance. And the drum was one of the earliest tools used for communication, so it made sense to me to think of it this way.

Practicing Precision
MD: Your phrasing is always very precise, even when you’re improvising. How do you maintain that level of focus and control?

Benny: I always fight to keep myself disciplined. I have to be sure that when I get on the set I don’t just doodle around and improvise. I have to practice first. If I start by playing freely, I have so much fun. But when I’m done I just want to go home. There’s a saying that time-management professionals use: “If you have to eat a frog, don’t look at it too long. And if you have to eat three frogs, eat the biggest one first.” [laughs]

MD: What’s your “big frog” at the moment?

Benny: A big frog for me is being able to play a groove to a click without any variations for ten minutes or more. It’s a mental exercise that’s almost like meditation. I just turn on the click and play a groove as well and spot-on as I can and get into the zone. I don’t want my mind dreaming away; I want to focus on what I’m playing. So focus and concentration are big frogs for me because it’s very difficult to play something like a paradiddle with full concentration where I’m thinking about different parameters like dynamics, sound quality, how my hands feel, and how I’m breathing.

Solo Structures
MD: How do you approach structuring a drum solo?

Benny: I like to have a framework of where I want to start, how I want to end, and different stations that I want to go to in the middle. Sometimes I leave out a station here or there if it doesn’t feel right that day, and I’ll improvise between each section. I try to get freer with my framework each year, and there have been shows where I’ve tried to have no preferences at all. But even if you don’t want to have any preferences, there are always things that you come back to. I was fighting that for a while. I tried to have a jazz approach of always expressing myself and not playing anything prepared. But I’ve relaxed on that a little bit, since I realized that I have some grooves and melodies that I love to play.

I often start a drum solo by playing very little–maybe using a small group of instruments or playing very slowly–so that I have ground to build upon. One signature thing I do is this double bass samba figure with two hi-hats and a melody. I get the samba pattern going with the feet, and then I play the basic melody with the right hand. Once that’s established, the left hand plays solo ideas and adds a backbeat. I enjoy doing that at the end of my solo, because it’s very high energy. But if I play the samba in the middle, I’ll break it down so I can build up something else. So basically I have a few set things that I want to play, then I try to make it musical by using contrasting parts, dynamics, different styles, and other things. It’s not witchcraft. Bach explored these concepts a long time ago.

MD: Do you have any parting words of advice?

Benny: Buy my DVD! [laughs] I would just like to say that it’s important to know the tradition and try to be creative at the same time. That’s the biggest thing: Know what came before and create the future.