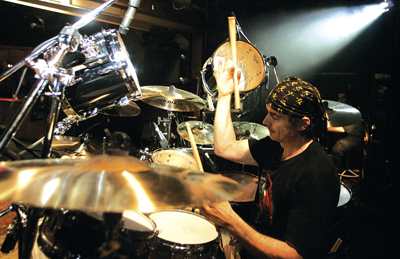 When guitar god Tony MacAlpine was asked to tour Europe in 2007, he called on two of his former band mates from Steve Vai’s touring group, bass virtuoso Billy Sheehan and drumming superstar Virgil Donati. The shredsters quickly gelled, and Devil’s Slingshot was born. This progressive instrumental rock trio recently released its burning debut CD, Clinophobia. In his typical otherworldly fashion, Donati creates over-the-top drumming concepts with a major “How’d he do that”? factor. In particular, “Flamed” and “Def Bitch Blues” display his complex wizardry. The drummer, who penned several tracks on Clinophobia, says, “I’m always trying to figure out something new on the drums, but finding time to carefully develop new ideas is the main problem. Writing music is my priority right now, and I work on developing drumming ideas related to that. And I’m constantly working on projects for many artists around the world.”

Fans will be thrilled to hear that Virgil is prepping a new solo album. “I’ve been working on it for quite some time, and it’s going to be truly unique,” he says. “I’ve written symphonic music for drums and orchestra, including a drum concerto. It therefore goes without saying that most of my listening time has been devoted to great orchestral works, and for further inspiration I’m also studying piano pieces by such composers as Debussy and Rachmaninoff. It’s a massive work, and I hope it will see the light of day in the near future.”