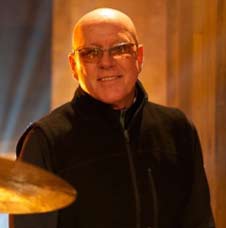 If you’ve ever wanted to take a lesson with L.A. studio veteran Russ Kunkel–keeper of the beat on dozens of the biggest hits to come out of California in the ’70s–here’s your chance. You can now learn from Russ in the comfort of your own woodshed, by logging on to iVideosongs.com.

“iVideosongs has a great format,” Kunkel says, “because unlike other instructional videos, they’re only as long as a song. They focus on the instrument and its integral parts–intro, verse 1, chorus 1, bridge, and so on–and you can jump to any point in the song and watch how the person played it. You can watch it over and over again until you totally understand how to play it the way it was originally done. Everything is revealed.” Kunkel’s clips include “Doctor My Eyes,” “Fire And Rain,” and, he says, “something we ended up calling ‘Session Drumming 101,’ which is an insight into my views on playing in the studio, producing, and such.

The drummer also just released his first solo album, Rivage, one of a series of CDs he’ll be putting out under the Chateau Beach banner. “My business partner, Spencer Merinoff, and I had the idea of doing an instrumental album of some of the big hits I played on in my career,” Russ says. “I have a history of playing on a lot of great songs.” Volume two is already in the works.