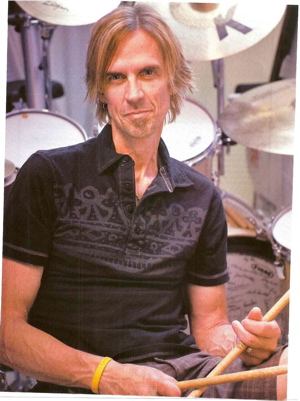 Hey there, MD skin bashers! Bruce Crump here–original Molly Hatchet drummer! Thought I’d take a moment and provide an update, especially for those of you who might not be familiar with my band’s history.

It’s Jacksonville, Florida, early ’76. Molly Hatchet starts out as a four-piece band–Dave Hlubek, Steve Holland, Banner Thomas, and yours truly. Then one night lead vocalist Danny Joe Brown came out to a club called La Vida’s in Neptune Beach and sang a few songs, and after that, we couldn’t get rid of him! Ha! Seriously though, Danny was a welcome addition and missing-link number one. Then came the decision to either add a keyboard player or another guitarist. Prior to joining Molly Hatchet, Banner and I had worked with Duane Roland, a local hotshot guitar slinger, playing to sold-out audiences in my grandmother’s living room. Duane was the natural choice–second and final missing link!

We started playing the Florida bar circuit until some of the guys from .38 Special recommended a guy they knew from Macon, Georgia who had managed a few bands. Pat Armstrong and his brother Jack ran a management/booking agency in Macon, so we went up and played for them. I guess they liked what they heard, because they encouraged us to start writing our own material. We did just that, and the next thing you know, we’re in the studio recording some demos.

By now we’re into 1977, and Ronnie Van Zant from Skynyrd got wind of what we were doing and took us under his wing–even letting us cut some songs at the Skynyrd studio. As best as I can remember, Ronnie was given the green light to produce some bands, and we were going to be one of them. Then the worst possible thing happened. We were coming back to Atlanta after playing a gig near Lynchburg, Tennessee. Earlier in the day we had taken a tour of the Jack Daniels distillery (go figure!) and were in pretty high spirits (sorry) when we pulled into the hotel parking lot. Pat Armstrong, who had become our manager, had gone with us and went inside the hotel to check us in. All of a sudden, he walked onto the bus, white as a sheet, and said that the Skynyrd plane had crashed. Ronnie, Steve Gaines, his sister Cassie, the two pilots, and road manager Dean Kilpatrick were all killed–everyone else was badly injured, some critically.

We forged on, however, and were signed to Epic Records on Christmas Eve 1977. We signed our record deal at a McDonald’s in Valdosta, Georgia! Our debut album, Molly Hatchet, was recorded at The Sound Pit in Atlanta with producer Tom Werman in the spring of 1978. Tom was producing Heaven Tonight with Cheap Trick at the same time, so he floated between the two projects until our record was finished. Epic released the album in August of ’78, and we immediately went out on tour with REO Speedwagon and UFO–what an amazing time that was–so surreal!

Millions of album sales followed with the release of Flirtin’ With Disaster in August of ’79, Beatin’ The Odds in ’81, Take No Prisoners in ’82, No Guts, No Glory in ’83 (featuring Barry “BB” Borden from Mother’s Finest on drums), The Deed Is Done in ’85, Double Trouble Live in ’87, and Lightning Strikes Twice in ’89. The band went through several lineup changes over the years, but we are the guys who wrote, recorded, and performed the songs live that are so recognizable to millions of die-hard Hatchet fans–God bless each and every one of you!

Sadly, we lost lead singer Danny Joe Brown in 2005 and guitarist Duane Roland in 2006–but our loss is heaven’s gain. Some of the surviving members of Molly Hatchet have reunited under the name Gator Country and are out playing select shows across the US. Band members are Steve Holland, Jimmy Farrar, Riff West, and me. Rounding out the lineup are Virginia guitarist Linni Disse and guitarist Paul Chapman from UFO. While home in Richmond, Virginia, I divide my time between teaching, playing some pick-up local gigs, and spending time with my wife and two young boys. I’m also involved with Virginia-based songwriter Marty Smilek, whose latest project, Stranded, will be released in January of ’09 under the band name Smilek.

Thanks so much for stopping by!