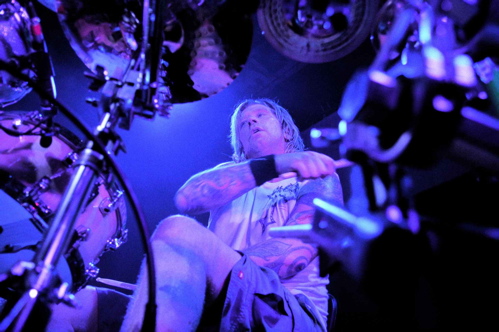 MD Online spoke to Jon while the band was on a short break from touring. “We’ve been out since July,” Wysocki explains, “with little breaks here and there; this is the longest break we’ve had. The day before we left to come home, we shot two videos back-to-back. So we’ve been busy.”

Busy indeed. In fact, as of right now, Staind is already back out on tour headlining with Seether and Papa Roach. The band’s latest CD, Illusion Of Progress, is currently at the top of the charts.

How do you stay in shape on the road?
Mostly by working out. Our set is about and hour and a half long, so it depends on what set we’re playing. If we play a set where we’re playing heavier, more up-tempo material, it’s a lot more difficult. But most of our hit songs are mid-tempo or slow, so it’s not high-energy all night—which I like, because I feel that I play better when the blood is flowing, and I don’t like getting cold. Working out is good for your cardio, and it keeps you from having to focus on keeping your energy up. You can concentrate on your playing more.

Do you warm up with a practice pad or have any other warm-up routine?
I do single-stroke and double-stoke rolls—nothing too crazy—and I’ll do a lot of stretching. You definitely need to stretch your hands, because things like carpel tunnel syndrome and rotator-cuff injuries are very common with drummers. If you don’t stretch before you play, you can create some problems for yourself.

While we’re talking about touring, what’s your favorite thing about touring, and what’s the worst part?
Favorite part of touring? That’s easy—playing the live show. The worst part for me is when fans come up to me, sometimes I feel uncomfortable with their excitement at meeting me…. People view you a certain way, but we’re just like anybody else who happens to be in a position that people think is glamorous. I don’t feel any different from anyone else, it’s just that I make my living playing the drums. People say certain things and I freeze up, I don’t know what to say back. If it’s a compliment, I say thanks, but when it’s that gawking, worshiping type of thing, it just makes me uncomfortable. But don’t get me wrong—I love and appreciate our fans!

Who turned you on to music?
I kind of turned myself on to it. But I’d have to say my mom’s side of the family probably had a big influence. I listened to a lot of early-’70s R&B and Top-40 music. And then I started getting into rock with The Beatles, KISS, Led Zeppelin…and then in the ’80s I got into Van Halen, Whitesnake, and all the ’80s stuff. But I also liked all those Shrapnel [Records] guys, because they always had some bad-ass drummer like Deen Castronovo or someone like that.

Remember Deen with Bad English, before Journey?
I love Bad English. I have the record!

That first album was killer.
Awesome!

How old were you when you started playing?
I started at five, busting up all my mom’s pots and pans before my dad bought me a drumkit.

Who were the first drummers you took notice of?
It was the late ’70s, early ’80s, so I’d have to say it was Alex Van Halen and John Bonham. I remember seeing Steve Smith when he was with Journey. He was playing Top-40 Journey songs, and then all of a sudden he does a drum solo and I’m going, “Oh my god….” He was doing this ridiculous odd-time solo. And Tommy Aldridge is an awesome rock drummer—a lot of flash, but solid.

What was the first concert you went to?
Aerosmith—so I can add Joey Kramer in there too. He’s another straightforward rock drummer. I can also mention some guys that I loved that were more into funk—like Dennis Chambers and Bernard Purdie. There are a lot of guys…Steve Gadd, Dave Weckl…. And I’m a huge Jeff Porcaro fan; I loved Toto. My all-time favorite groove is “Roseanna.” Growing up, I was more a musician’s player. I don’t consider myself that now. There are guys that I grew up watching that I’ve since gotten into conversations with, and if they compliment my playing, I don’t even know what to say. I’m like, “Thanks, but I’m just doing my thing.” Like Kenny Aronoff—who I remember playing with John Cougar Mellencamp—I worship guys like him.