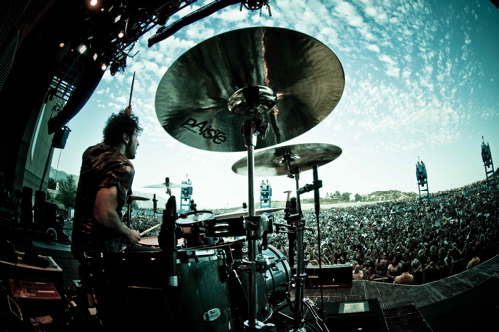 No one who knows him would argue that Papa Roach’s Tony Palermo wasn’t one of the hardest-working drummers around this past summer. Touring with Papa Roach on the Cruefest was a dream come true for Tony. In fact, the drummer got to live his dream twice every night—performing not only with PR, but with Sixx: A.M. as well.

“If somebody told me back in the ’80s that I would someday be on tour with The Crue, Tony insists, “I wouldn’t have believed it. And if they said that not only will you be on tour with them, you’re going to be playing in Nikki’s side band, I would’ve lost my mind!”

Since replacing the popular Vacaville, California band’s original drummer, Dave Buckner (the group’s label described his leaving as due to ‘personal matters’), Tony Palermo has been busy touring and recording PR’s upcoming CD. MD online spoke with Tony a few days after Cruefest ended, and right before he headed back out for the remainder of the year with Papa Roach, who are touring with Staind and Seether.

Let’s talk about how you landed the Papa Roach gig.

I’ve got to thank drum tech Dave Padia for bringing me in. He originally worked with me and then left to work with Dave Buckner, PR’s previous drummer. Last year some stuff went down with the band; they called me to fill in for a few tour dates, and we created some great energy on stage. Then when it came time for them to make a change, they called me back.

We had already established our relationship on tour. We really didn’t know how the writing was going to go because we’d never written together, so they brought me on for a writing session and it was just golden from there.

Would you say it’s equally important to be able to play the gig and to have it click personality-wise?

Definitely. I think once you get to a certain level of skill you can pretty much step into any situation that you want to and make it work playing-wise. But when you also need to live with people on tour, that’s huge. Nobody wants to live with somebody on the road in a tight bus if it’s conflicting. As a human, you go through emotions: Your family is at home, and you’re away for months—it’s rough. Right up until the day before we started the tour, we were in the studio trying to finish the new record. I’m just so fortunate and happy to be out there playing.

Are you playing on the new album, Metamorphosis?

Yes. They brought me in at the beginning of the year, and we dove in and moved into a home in LA and wrote and demoed the record. I pretty much had a few years of music building up in my head. With my new MacBook I was able to throw beats down in Garage Band whenever I was home, and that really helped. Then I brought a lot of beats into the writing session, and I think they were happy because it sort of brought a new energy to the band. Coming from a punk rock kind of scene, they’re always telling me, “Slow down, dude.” [laughs] But I felt the energy that the band can put forth when we played live, and we needed to translate that into the record. We’ve definitely accomplished that on the new one.

The band hadn’t changed members since 2000, so it’s a new thing for them and their fans. I’ve got to say this about the fans: They’ve been really supportive, coming out to the shows and really enjoying them. There hasn’t been any crazy backlash as far as my being a new member. Everybody who knows the band appreciates them for what they were before, but it’s a new style now and it seems like they’re embracing it so far.

So, how did the Sixx: A.M. gig come about? Was Papa Roach already booked for the Cruefest tour?

The tour was being put together, and obviously Motley Crue the main act. Nikki Sixx wanted to bring his side project out and felt that this was going to be the perfect time. He wouldn’t have been able to tour much otherwise, because Motley just released their latest record. So they approached Papa Roach about it while we were in the studio writing, and we said, “Yeah, we’ll do it!” Who wouldn’t tour with Motley Crue. [laughs] Being fans made it very surreal. And then we heard it was going to be Sixx: A.M. as well, and I kind of sparked up. The band was like, “Are you going to play double duty?” because they knew I had played with Nikki previously. Then I saw Nikki and he asked me the same thing. He said that he was going to be doing it, so he thought I needed to do it as well. When somebody like him asks you, it’s like, “Okay, I’ll do it! I’m up for the challenge.” I knew it was going to be two sets a day, but?