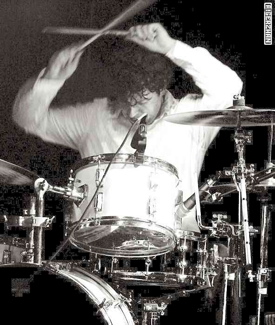 I never really saw myself as a session drummer. Touring is what I like to do best. I love to travel, I love hotel rooms, I love having to improvise on the road, I love meeting new people. I did a bit of session work back in Holland, and definitely started doing a lot more once I moved to New York in 2004. But touring and playing live shows with people is what I always considered “my thing.”

Late last year, I decided to rent my own small room/studio where I would be able to teach and that I’d have access to 24/7. I shared the room I was renting before that, and I only had a limited number of time slots a week. This made my teaching schedule very inflexible. So I got this little room in Queens, right over the Queensboro Bridge, minutes from Midtown. 24/7 access. This bumped up my number of students immediately, since I was now completely flexible, time-wise, and I live five minutes away.

Then I started thinking—. Even though I was never really a studio drummer, I’ve always been fascinated with audio engineering. I’ve owned a basic recording setup since I was fifteen (pro mics and a 16-channel mixing board) and have always enjoyed messing around with this equipment and getting great drum sounds. I’ve developed a great feel for miking and tuning drums in the studio, and for getting killer drum sounds. When recording at a professional studio, I’ve always been able to contribute ideas and suggestions to improve recordings. So now that I had a whole bunch of this gear anyway, and a room where my drums are set up at all times, why not record drums here?

So I started saving up cash and investing—converters, preamps, more and better mics—. Did a demo here and there for friends—. Now, almost a year later, I find myself almost overloaded with recording work. In the past six months I’ve done several albums and numerous songs for people all over the world. I’m learning more than I’ve ever learned before. I get to analyze my sound and playing more than ever–every note, every drum, every cymbal.

Some people send me a demo with programmed drums and want me to copy that note-for-note. At first I thought I would hate that. But as it turns out, it’s an awesome challenge. It forces me to approach songs in a way I would never have come up with otherwise. And the biggest part of the challenge is to play the notes as they were programmed, but still give it my own sound. There’s immense detail going on, which I never realized was there, or that it would be so significant. Five to ten milliseconds’ difference in a backbeat or hi-hat note can completely alter the feel in a song. This was something I was always sort of aware of, but never had the chance to really analyze before I had the option to record at my own place and in my own time—and on my own.

Even more importantly, I’ve been doing recordings in lots of different genres. I’ve always been sort of “stuck” in the hard rock/metal world, while I don’t see myself as a hard rock/metal drummer at all. Funk and soul drumming are closest to my heart, though I will admit I love the challenge and energy of metal, and probably always will.

I’m currently working on fourteen tracks for the new album by guitar virtuoso Mike Orlando, and will soon start working on the drum tracks for Symphony X vocalist Russell Allen’s new solo album. I just did a song for KorN guitarist Shane Gibson. But I’ve also been working on a lot of indie rock and acoustic pop with some very talented people here in NY and Europe.

I love spending time at my studio, perfecting drum tracks to killer music. No time pressure, no one distracting me from laying down my best possible performances. I can live with a track for a couple of days, and go back in and redo it if I’m not totally happy with the sounds or the feel. And when I’m done, I send the track to the artist, keep my mics set up, and don’t alter the tuning of my drums until I get the okay from the artist. This way, I can always go back in to punch in a fill or bridge that they’d like to me to change.

Collaborating is great fun, and being able to help materialize people’s compositions is very gratifying.

So, by the end of this year and early next year, releases I play on should start coming out. Very exciting!

In the meantime, check out the recent album I recorded with Guns N’ Roses lead guitarist Bumblefoot (a.k.a. Ron Thal), Abnormal. It’s available anywhere and everywhere. It’s my second studio album with the Foot (though I’ve been his live drummer for the past six years). I’m very proud of this one. Videos of the sessions can be found on YouTube. Just do a search on my name and “Bumblefoot in the studio.”

Hopefully I’ll hit the road with Bumblefoot next year!

For more on Dennis Leeflang, go to www.dennisleeflang.com.