Well, as the old joke goes, “What do you call someone who hangs around with musicians?” Yes, the answer is “a drummer.” Well, I’m certainly one person who does not get offended by such humor. I never classify myself as a musician, as it’s only a title after all, and if I were going to chase titles, the one I would most ideally enjoy before my name would be “King.” Not for a moment am I saying that drummers are not musicians–take John Bonham’s drum solo in “Moby Dick,” surely that is a musician at the top of his game. It’s just that it would be an injustice to place myself in the same musical brackets as the likes of John Bonham and Stewart Copeland, mainly because I wrestle with the drumkit, like a beached whale trying its hardest to find the water’s edge.

None of this gets me down. To enjoy playing an instrument, you do not have to be a master of them. Every night when I place myself on stage for a fight with the kit, I do so with a smile on my face. It’s better to be in the race and trailing at the back than not be in the race at all.

So when receiving an email asking if I would be interested in scribbling a few paragraphs down for an online drum blog, I must admit I thought someone was having some kind of practical joke at my expense. Even while writing this, I still believe that this is not going to be printed online, but just in case, I cannot risk losing such an opportunity to feed my ego. Like a true media vulture, all I want is fame and fortune. One second—I have to check with my manager regarding how much I am going to be paid for this article.

Right, with the math done and money in the bank, I will now continue.

I travel parts of this world with four close friends, and collectively we are known as People In Planes. We’ve been touring for a good few years, and it’s fair to say I still desire to play large arena shows, the ones where the drum riser sways in the heavens and you get those funky laminate passes that tell everyone you’re in the band (more to the point, where security knows that you’re allowed backstage to get your stick bag before you go on). I’m not a person who is always on top of their game, and when it comes to show time I’m always found leaning at the bar, or sleeping in the van not realizing the time. Night after night I run around frantically trying to gather my drumming possessions as stage time creeps seconds closer. But when they’re backstage, and standing in between the treasure and myself is a burley bouncer asking to see venue passes, there’s no worse feeling than when you look down and remember that you lent your pass to a friend so that they could hang out back stage, where the beer flows freely.

So, as I’ve already mentioned, I try my hardest to play drums in time with a band called People In Planes, who land in the genre of Rock Music. Yet since that category spans so many different types of groups, the only way to truly grasp what I mean is to come and check out our live set. Plus come see me before the gig, and I will lend you my laminate so that you can go backstage for free beers. If you do not like the music, just get drunk.

My ambition is that when I grow old I’ll be playing jazz every Thursday and Friday night in my small local pub called Cheers, where everybody knows your name and when it comes to kick-out time, the doors are firmly locked and the regular drinkers spend the early hours of the morning sipping whiskey and sharing tales of the good old times on the road.

I respect any drummer who doesn’t overplay. Always be willing to allow the track to breathe. If that means playing a simple 4/4 beat, then so be it. Well, that’s my excuse for playing a 4/4 beat through the whole album.

Must get going, as it is now time to don a flowery Hawaiian shirt, turn the smoke machine on, and jump behind the biggest drumkit I can find in the shop, so that we can get a few fake pictures of me trying my best to look like a serious drummer. Or maybe I should just go all out and drum topless.

For more on John Maloney and People In Planes, go to www.peopleinplanes.com or www.myspace.com/peopleinplanes. Photo by David Bergman, www.davidbergman.net.

Tim Turcott of The Exit Strategy 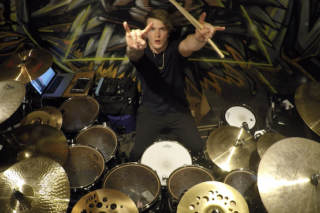 Josh Devine of ZFG and One Direction — On The Beat