The 10 Commandments Of Modern Drumming

1. Honor thy mother & father.
—Because you’ll probably be living in their basement for a long, long time.

2. Strike thy kit or be deemed a bastard.
In my many years as a touring drummer, only the really pompous, egomaniacal drummers refuse to strike their kits. (You know who you are.) Don’t be one of those guys. It’s never cool.

3. Thou shall shut up in between songs.
It’s soooo annoying! Seriously! No one is impressed. Just put your sticks down and take a sip of water. Do a stretch. Whatever it takes to not be one of those noisy jerks who ruins the dialog between the front man and the crowd.

4. The show must go off.
One time, I was watching a guitarist named Bob Log lll play a show in Kansas City, MO. He plays solo guitar and sings into a telephone. For a few of his songs, he has a drum machine programmed to back him up. Well, as luck would have it, his drum machine crapped the bed in the middle of a song. Did Bob Log cry and whine and stop the show? No! He kicked the machine in an attempt to fix it. When that didn’t work, he paused for a brief moment to tell the crowd that, “Where I come from, if you can’t play without your computer, you’re a pussy,” and kicked back into the song and finished his set to great applause. I guess he and I come from the same place. If you can’t learn a good lesson from that—you must be from somewhere else.

5. Know thyself.
If you know that you have a weakness (like you can’t shuffle, or you can’t play a double kick pedal), don’t go throwing it into your set until you learn to really pull it off. Otherwise it makes your whole band sound bad.

6. Waste not, want not.
A. If you change your heads when they’re only slightly used, give ’em to another drummer who needs ’em but can’t afford ’em. What goes around comes around.
B. You shouldn’t waste money on a drum tech or huge monster drum cases unless you really need them. It’s a waste of money and it makes you look stupid to anyone who knows better.
C. If you can’t afford drum techs, don’t use a huge stupid drum/hardware rack. (You know who you are, and you are a huge pain in the ass for every other band playing that show.)

7. Do not covet thy buddy’s style (especially if your buddy is Travis Barker).
When you find yourself on tour for long periods of time, you will no doubt find yourself captivated by the style of another band’s drummer. When this happens, it’s only natural to be influenced by what he or she is playing. Go ahead. Watch it. Love it. Figure it out, and in small doses, apply what you’ve learned to what you play in your band. But for Pete’s sake, show some restraint! Don’t ape it all note-for-note!

8. Hurry up! And I don’t mean the tempos. I’m talkin’ about setting up and tearing down before and after your set (especially when my band is up next).
A. Have your gear set up way, way, way ahead of time, or at least a half hour before the band before you is done.
B. Before you even leave your house/practice spot, mark your hardware with a Sharpie so you know exactly how to set up quickly.
C. When your set is done, pick up your kit and move it off stage before you break it down. Don’t remove your cymbals or anything. It’s really unprofessional, and you might end up screwing the next band out of their set time.

10. Thou shall not drink too much before your set.
Know your limits! Is this your first day at the rodeo? 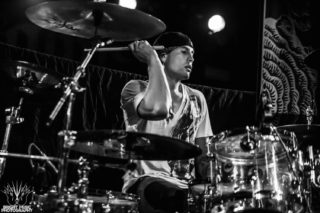 On The Beat with Robert Ortiz of Escape The Fate: Finding the Connection