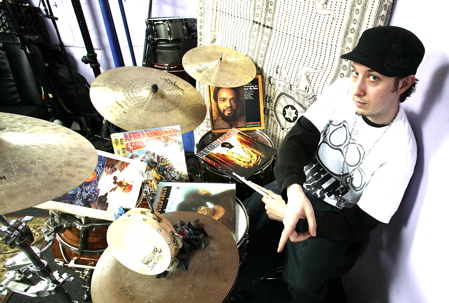 When MD spoke to Adam Deitch about Lettuce’s new LP, Rage!, and other aspects of his funky career, we had so much good stuff left over that we now offer this exclusive addendum to the August feature story. Enjoy!

ADAM ON MESHELL NDEGEOCELLO AND HIS DRUMMING BUDDIES…

I’ve been a fan for years. We get along very well as people. I don’t believe I’m in the class of guys like Gene Lake, Sean Rickman, Deantoni Parks, and Charles Haynes–the guys she’s been playing with are, to me, the number-one modern guys. Charles Haynes is in her band right now. He’s from East St. Louis. We went to Berklee together, and he kicked my ass nightly and taught me a lot. Deantoni Parks–I’ve been a fan of his band Kudu since Berklee. We studied with Kenwood [Dennard] together and had a lot of bonding three-drummer experiences.

Deantoni, Charles, and Mark Simmons–who plays with Al Jarreau, Stanley Clarke, and George Duke–took me under their wing and showed me love: “You know what, white boy, you’re gonna be alright.” [laughs] “If you want to play this music, go ahead. Do you.” I’ve seen them play where they were so ill that I came home and broke a door in my apartment. It seemed unattainable, and it still does. But the whole thing is: You gotta have your own voice. That’s what they helped me understand.

Just phenomenal. I love Chris–he’s a maniac. We were doing a Lettuce tour with Meshell in Japan, and at the last minute Chris couldn’t go. So they asked if I could do double duty. I said okay, and we played for a week. I was nervous–I wish I could go back in time and do it again with a more confident perspective and less awe. But it’s hard when you’re around her, because she’s awe inspiring. She’s like a Miles Davis of our generation.

ADAM ON PLAYING ALONG WITH PROGRAMMING…

My dad was on the cusp of music technology. He was the first guy to have a drum machine, the first guy to have a MIDI bass thing. I would put on those super-robotic beats and play along for hours. And I played a lot with hip-hop records. My mom was yelling down, “Stop playing the same beat!” [laughs] I enjoy it. Some people look at it like, Oh no–evil. But I’m of the generation where machines were part of what we listened to and what we played along with growing up.

Any tips on how to do it?

Make sure your headphones are loud enough. That’s the biggest problem with locking in. And keep in mind that we tend to flam late. When that thing hits, we’re usually a couple milliseconds behind, which is natural–humans have feel. So I’ll purposely play, in my head, on top of the beat, but really it’s pretty much spot on.

He’s the number-one musician’s hip-hop producer, and he recently passed away. His dad was a jazz musician, I think, and had thousands and thousands of records. And J Dilla learned ’em all and knew every little bit of each one, and he created soundscapes with these records. He tried to recreate the feel of a jazz record in hip-hop, and that’s loose; it’s got a swing, it’s got a vibe–it’s human. He took a very quantized art form and made it very human, almost…like…African or Moroccan. In hip-hop, that’s a whole different thing: The hi-hat’s late, the kick’s early, the snare’s in the middle.

How did he program that?

He played it live on his MPC pads. He’d do two minutes of a hi-hat pattern, and then he’d do the snare. So he’s playing as if he’s playing drums. He’s programming, but he’s thinking live. He wants to have the feel of the records he loves so much, and those records are not drum machines. Everyone’s checking him out right now and doing their Dilla impressions. Some people are taking it overboard–you shouldn’t drag when you play your Dilla stuff. Even though you’re supposed to be laid back, keep the time where it’s at and still lay it back. That’s when you know you got it.

ADAM ON A SPECIAL LESSON AND HIS OWN TEACHING…

I had a lesson with David Garibaldi when I was thirteen. He was teaching at my local drum store, and my dad’s like, “We’re going to study with Garibaldi right now.” I’m like, Oh, shit! And his whole thing that day was ghost notes: You have different height levels for your accented and unaccented notes.

I remember at the end of the lesson I asked if he’d play “Oakland Stroke” or “Soul Vaccination” really slow. I had a tape recorder with me, and I recorded it. So for years and years I had this tape of him playing these grooves slow, and I just soaked it in and kept going back to it. Sometimes you think you know a record–you think you know The Meters, or you think you know Earth, Wind & Fire. You go back to that, man, six months or a year later, and you’re like, Shit. There are so many little things. “There’s a swing to it I didn’t realize!” I have this radio show of Garibaldi in ’71, and the dude’s got a really nice swing to his playing, and it’s all about his ghost notes. His ghost notes swangg–they don’t swing, they swangg.

If we asked you to play one of your beats real slow, could you do it?

Yeah. That’s the educator in me, being able to analyze what you do. It’s kind of good and it’s kind of bad. Some of the best cats are like, [raspy] “I don’t know what I’m doing. I just go.” But man, they learn the shit too. I mean, if someone asks me what I did [on a specific song], I don’t know. But if you play me an excerpt, I’m going to be able to break it down slowly and explain the sticking, the vibe, and where it came from.

Do you write things out with your students?

We do a little notating, but they’re not there to learn how to read. I insist that they bring a tape recorder, though. I say, “Listen, drums were passed down through the oral tradition for thousands of years before we got to writing shit down. All that music from Africa, Brazil, whatever, it wasn’t taught with no paper and pen. It was taught by: ‘Here it is–I play it, you play it, I play it, you play it, now you got it.’ I’m gonna make you use your ear. Don’t worry about your eyes. Get out of that staring-at-the-page thing. Look up, look at your bass player, look at the crowd.”

In India they can speak every rhythm.
Every drummer should have their own verbal way of breaking down rhythms. I used to beat box for my rapper friends. If you have your inner beat box, or the way you interpret the drum sounds with your mouth, and that’s connecting to your hands, you’re in the zone.

ADAM’S TRICKS TO GET A LAME AUDIENCE TO START MOVING…

Four on the floor is so underrated. That’s why we started Rage! with “Blast Off.” We start our shows with it too. It just has that stomp-it-out vibe, and if you can’t feel that, you’re dead. [laughs] Four on the floor will get ’em.

I also like to look at the audience. When the crowd sees your eyes, as long as you’re not a ham…. I know hams–that’s not what I’m talking about. But when the crowd sees your eyes, it makes them feel good. It’s live music. It’s not television–you’re interacting. You get into the more African tradition of, We’re all in this together, as opposed to the European side, which is, We are performing, you are clapping. That usually works.