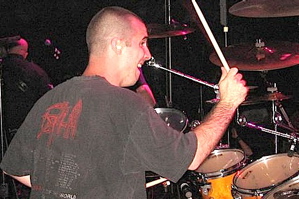 Hey, everybody! My name is Steve Bolognese, and I play drums with Into Eternity. First off, I want to say thanks to Modern Drummer for the blog space. I’ve been a fan of the magazine longer than I’ve actually played drums.

We’ve finally come across some downtime in the I.E. camp (aside from mixing the record). It’s been a real busy year for us so far, so the time off for me is well needed. It’s coming up on two years since I joined my favorite metal band. It’s really strange how things work.

We recently finished recording the band’s fifth album, The Incurable Tragedy. This is the first Into Eternity record with my playing on it. We began writing in October, after finishing up the Dream Theater and Edguy tours. Since the band lives in Canada and I live in Boston, we had to send the music over the Internet, like so many bands are doing these days. I came up with my drum arrangements throughout November, and we planned to hit the studio in March. As some of you might already know, though, things can change really quickly in this business–and they did.

I was vacationing in Puerto Rico when I got the call from Tim asking me if I knew how to speak Japanese. I responded by saying, “Not quite. Why?” He said, “Because we’re going to Japan.” Needless to say, I was psyched. This was the band’s first trip there. But what followed the good news was the realization that now we had to finish the record before we left. This left very little time to solidify my parts. The recording was pushed up by three months.

So in January I flew up to Saskatchewan, and without having had even one band rehearsal, I began tracking drums. I was amazed at the confidence the band had in me, considering they had no clue what kind of ideas I had come up with–they didn’t hear the drums until they were already recorded. But they were all really stoked when they finally did hear it, so that was a relief.

Soon after we recorded the drums, we began to rehearse for the upcoming Symphony X tour, which was amazing. Can’t say enough about those guys; they’re all extremely cool and talented. After that tour we played one more show, this one was with Children Of Bodom (another amazing band). The show went awesome, and after we played we headed to the airport for the much-anticipated trip to Japan. Once we arrived we met up with At The Gates, Dillinger Escape Plan, Mayhem, and Pig Destroyer for what was to become a very memorable trip. We played three shows, finishing in Tokyo with what I thought was one of the coolest shows we ever played. Nobody was lying when they said that the Japanese fans were diehard; they were some of the most appreciative I’ve ever seen.

So now I’m home in Boston, getting my well-needed practice time in, plus teaching my own students and getting ready to teach at the Berklee College of Music’s World Percussion Festival for the second year in a row. It’s quite an honor and a treat to be part of such an inspiring week for drummers here in Boston. It was about thirteen years ago that I attended the same festival as a student. Now I’m teaching at it–who would have thought?

So I’ll be home through August, then begins the Canadian Summer Slaughter Festival, which includes one of my favorite bands, Necrophagist. I’m really looking forward to this tour, which will feature some of the best musicians–especially drummers–of the genre. I’ll be sure to bring my notebook.

My gear situation for now is a Pearl Export Custom kit, with Sabian cymbals (a lot of HHX and Hand Hammered), Axis pedals, and my trusty ol’ Vic Firth 5AN sticks.

That’s all I’ve got for now. ’Til next time, keep the sheds alive!

For more on Steve Bolognese, go to www.myspace.com/speedbolognese or www.intoeternity.net.