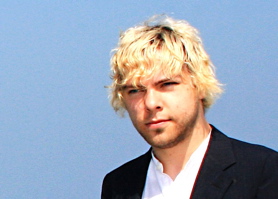 Edinburgh, Scotland. Thurs, 1st May 2008. How did I, a young lad from Fife, end up in The Wedding Present? That’s what I’m usually asked, anyway, by those who know of the band’s roots in the north of England in the 1980s. A few fortunate coincidences, really–luckily Chris (WP guitarist) thought of me when David Gedge asked if he knew anyone suitable. He remembered that when he recorded me drumming for Silvermash the previous winter, my accomplice Alexander and I had spoken of our interest in David’s band, The Wedding Present, especially the Bizarro album. I hadn’t been doing much drumming, though, and it took me a while to lose the rustiness. Two years and maybe a hundred gigs later, though–and with a new album on the way–I’m still here—.

There aren’t many cooler drum sounds around than Steve Albini’s. You almost certainly know what I’m talking about, but if you don’t then try Jon Spencer Blues Explosion’s Plastic Fang album (the tremendous Russell Simins drumming), any Shellac record (Steve’s own band, with Todd Trainer hammering the kit), not to mention his previous Wedding Present recordings! Recording our new album, El Rey, with Steve was something I was looking forward to immensely, and the eventual experience didn’t disappoint.

I thought I’d really made a fool of myself at one point, though. I used soft-headed mallets on one track (“The Trouble With Men”), as I fancied the muffled, boomy sound to suit the atmosphere of that song, and played a bit of a weird beat with ride cymbal in it. Realizing there wasn’t much of an attack when I played the cymbal, I suggested to Steve that he might want to use a closer microphone to catch it. At that very moment, Chris, our guitarist who’s a studio wizard in his own right, burst into laughter. Panic-struck, I thought, “Have I just told this famous engineering genius how to mike a drumkit?!” But fortunately Chris hadn’t heard me at all, and Mr. Albini even thought it was a sensible idea.

We’re delighted with how it’s turned out–here’s hoping some of you agree come the end of the month. It was the first full album I’ve been involved in, and I have to admit that some of the process was different from what I’d anticipated–especially at the writing/arranging stage. We’d all contribute musically, David (Gedge) would write the “song,” and then we’d get together as a band and come up with a final arrangement that was often barely recognizable from the original demo. I found myself getting a little impatient with the deliberation over structures and details, but with hindsight I can’t deny the benefits; I think we’ve gotten the best out of the songs. I have, however, been able to indulge all my arrangement whims in one case: I’ve done a remix of our current single, “The Thing I Like Best About Him Is His Girlfriend,” which you can find at www.music.download.com. (Search under The Wedding Present.)

I’d like to use some of this space, if you don’t mind, to mention someone to whom I owe major gratitude for any kind of drumming career I might manage. My first teacher was a guy named Ian Garry, in my hometown of Glenrothes. Ian passed away recently at far too young an age. Apart from being a great player, he was a fantastic teacher in two particular ways: He knew, pretty much straight away, what it was that appealed to my eleven-year-old ears about the drums, and he used that understanding to continually introduce me to new things–to stoke an enthusiasm for the drums that I would never lose. In a more technical sense, he helped me to separate my limbs and boost my coordination really early in my learning, before I could pick up restrictive bad habits. This was all done through prescribed bits-and-pieces that were fun to tap out wherever I found myself, and could be applied to the music I was into at the time. I feel I’m still improving as a drummer, and I’ve a lot still to learn. But if I do become the kind of fluent and adaptable player I’d like to be, it’ll have a lot to do with the way I started out with Ian.

Thanks for reading. See you in a city near you later this year.

Photo by Catherine Wygal. For more on The Wedding Present, go to www.myspace.com/theweddingpresent or www.scopitones.co.uk.