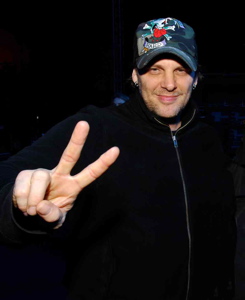 Randy Cooke was born in Toronto, Canada, and has been playing drums since he was a kid. Influenced by his dad, a snare drummer for The Toronto Scottish Pipe & Drum Band, Randy began learning drums in the military drum corps known as The Cadets Lancers Of Etobicoke. When he turned fifteen, he got his first “real” kit and started playing with a funk and reggae band called Phase IV.

After high school, Randy began doing session work and became a top “hit man” in Canada, before moving to Los Angeles a few years ago. The short list of artists Randy has worked with includes Hilary Duff, Kelly Clarkson, Jessie McCartney, Natasha Bedingfield, Deep Purple’s Ian Gillan, and Dave Stewart of The Eurythmics. It was through Stewart that Cooke got the call to be part of Ringo Starr’s promo band for his latest release, Liverpool 8. Randy also accompanied Ringo on his return to his hometown for the European Capital Of Culture Celebration. (See the July ’08 issue of MD for the full report of the legendary Beatle’s tour through the city of his birth.)

MD caught up with Randy in New York City, at the filming of Ringo and his band’s appearance on Rachel Ray’s TV show.

So, tell us what’s it like to double drum with Ringo.
It’s amazing! Looking over to my left, it’s definitely a little surreal because there are so many things going on at the same time in your head, like, “Oh my God, this guy is an international icon.” He’s a personality, so there’s the fame aspect that you’ve got to try and get over real quick. But not only is he one of the most famous people in the world, he’s a famous drummer, which compounds the whole experience. So as a drummer, you’re in awe, you’re nervous, you’re excited, and you’re freaked out!

The technical aspect of Ringo as a player, for me, is pretty interesting in that I’ve spent my whole life playing to click tracks. I grew up in an age where every session I did was to a click, and on every live gig I was playing to tracks. So basically I’m painfully aware of tempo fluctuations when I’m not playing to a click. With Ringo, I didn’t know what to expect at first. Playing with another drummer is kind of a roll of the dice in terms of how well you’re going to lock into each other’s time…who’s following, who’s leading in the dance, you know what I mean? Of course, I’m going to be following Ringo when he plays at the kit.

I’ve got to tell you something…. I told Ringo this after one of the gigs: “You have the most amazing internal clock of anybody I’ve done this with.” When you see a drummer in a band play, it’s hard to tell what his or her internal clock is like. It’s not something you can home in on as well as when you’re playing with them—the same instrument, no less, and an instrument that’s percussive. So there’s no room for error. Ringo’s time was so solid that, because I’m used to playing to a click, it was actually very easy to play with him because he was like a metronome. The guy doesn’t slow down, he doesn’t speed up, he’s got a great feel, and he just sits there like a freight train. I told him, “You made it so easy to follow.” A couple people said to me, “When you guys did double drumming, it was really locked.” My skill at being able to lock to a click played a part in that, because I can’t lock to a click while the click is moving. But when the click is steady, it makes my job really easy. Watching his snare hand come up and down was a visual and audio metronome, and it was really fun. I didn’t have to think about it at all. 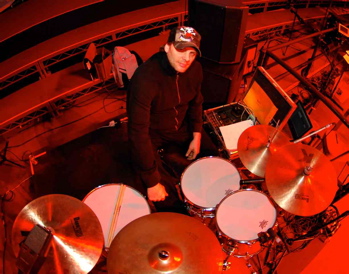 When I interviewed Ringo, I asked him about playing with a click and he said, “I’m not from the click track school.” [You can see full interview in the MD Web archives.]
It’s amazing. I have to tell you, I’m a little envious of guys who have that natural sort of solidified internal clock. One of my favorite drummers growing up, other than Ringo, was Stewart Copeland from The Police. I was a white kid playing in a reggae/funk band in Toronto, and he was the closest drummer I could find that was playing reggae and rock, sort of fusing those two genres together. I remember hearing early Police recordings and listening to how they sped up a little bit at the end of the song as the energy and intensity developed, and that’s what I thought was supposed to happen.

How did the Ringo gig come about with him?
It started with Dave Stewart’s solo project. I’ll fill you in from the beginning. A guy in Toronto that works for Ray Daniels’ management company, SRO, by the name of Andy Curran, who also manages Rush, recommended me for Deep Purple vocalist Ian Gillan’s solo gig, and sight-unseen I was hired for his tour. That tour was swinging through Los Angeles, and in the House Of Blues dressing room, I met a guy named Michael Bradford, who at that time I learned had produced one of the Deep Purple CDs. He is also from the Kid Rock/Uncle Kracker camp. So we exchanged information and started working together on some projects that he was working on here in LA. Mike Bradford ended up being Dave Stewart’s music director and bass player, so when Dave needed a band, sight-unseen I was hired. So now I’m in the Dave Stewart camp, touring around, doing gigs and a solo CD. Meanwhile, Ringo had been writing the material for Liverpool 8 with Dave, and Dave basically ushered his entire band into the Ringo gig. Ringo came to see us play in LA at the Viper Room after Dave suggested us.

Did you know he was there that night?
Yes, I did. I didn’t get to meet him, though. I ran back to the trailer out back, but he had already split. But I guess I got the seal of approval.

Having grown up with Ringo as a big influence, it must feel amazing to be part of his touring band.
I had only two big influences: Buddy Rich and Ringo Starr. My dad was a drummer, and his drumkit sensibility came from Buddy. He was always buying me Buddy’s albums. It was my mom who listened to the radio, loved the Beatles, and bought me Beatles albums.

So those were my two main influences. The chops and sort of technique-oriented jazz side came from Buddy, and learning to play songs came from Ringo. To this day, I’m more the second type of drummer. And the best school for playing to a song is listening to Ringo Starr and The Beatles. Look at how huge their song catalog is, and look at who is drumming. I can’t tell you the number of times in my career as a session drummer when a producer or a band member would say to me, “At this moment in the song, we need kind of a Ringo feel.” If I had a dollar for every time I heard that! [laughs]

Did you study with your dad at all?
Yes, he was the first one who started me playing rudiments. He didn’t get me on kit right away, and looking back, I’m really glad about that. To this day I stress that students work more heavily on their hands at first than on the kit, because I really feel that those are the tools that allow you to do what you need to do. And I played in marching corps first, when I was fourteen. I did a couple of years of that. That definitely helped develop my hands.

When did you learn how to read music?
That was standard high school music class stuff, basic reading. Then I took private lessons from a couple of guys in Toronto—Dan Bodanis and Rick Gratton. I already had basic theory in high school, but I never went to college—just the school of life.

On the sessions that you do, is there a lot of reading involved?
No, the reading I encounter is predominantly in the jingle scene. I was one of the number-one calls at one of the largest jingle companies in Canada, Rosnick MacKinnon, and that was all reading. The hardest charts to read are big band charts; jingle charts are just basic form charts and grooves, with stops and starts. I can read that stuff fluently. 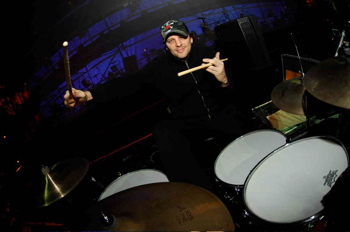 What about the record dates?
What commonly happens nowadays is that someone sends you a CD ahead of time, or MP3s. Or you get nothing, show up in the studio, and there they play you the demo.

How long have you been living in LA?
Four years. The bulk of the CDs I’m on are out of Toronto, but in the past four years, all of the artists of notoriety I’ve been working with [Hilary Duff, Kelly Clarkson, Jessie McCartney, Natasha Bedingfield] were out of LA. I just did three tunes for the new Uncle Kracker CD. And I’m playing some dates with Raine Maida, the lead singer from Our Lady Peace, on his solo stuff.

So, would you say playing with Ringo is a dream come true?
Yes, I would. It’s definitely launched me into a bit of a spotlight, where people are starting to take notice of some of the other things I’ve done. They used to call me “Toronto’s best-kept secret.” I don’t want to be a best-kept secret anymore! [laughs]

For more on Randy Cooke, go to www.myspace.com/randycooke.