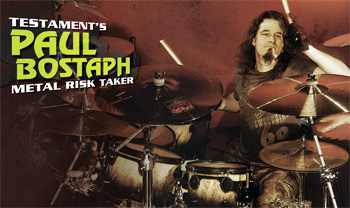 “The demand on modern metal drumming is such that you have to be able to play a lot more syncopated patterns with your feet. I can’t approach double bass the way I used to.”

Slayer, Testament, Exodus, Systematic, Forbidden: Over the past couple of decades, drummer Paul Bostaph’s résumé reads like a “wish list” of heavy rock, metal, and thrash acts. But it’s really no surprise that this Bay Area–based one-man demolition crew has been able to land such an outstanding host of heavy gigs.

Bostaph spent his formative years in the late ’80s and early ’90s with Forbidden. It was his first successful venture in the music industry, and was immediately followed by his lengthy stint in Slayer, his highest-profile gig to date. Bostaph dutifully–and impressively–replaced the mighty Dave Lombardo, touring with the veteran act for several years and even recording five highly regarded Slayer full-lengths, 1994’s Divine Intervention, 1995’s Live Intrusion, 1996’s Undisputed Attitude, 1998’s Diabolus In Musica, and 2001’s God Hates Us All.

Since leaving Slayer, Bostaph has consistently maintained his monstrous stance in the metallic drumming niche, thanks in large part to his amazing kit agility, furious speed, and excellent attitude. His recordings with bands Systematic and Exodus are additional proof of a career that has continued to plow forward.

And this year is proving to be no different, as it finds Bostaph re-joining thrashers Testament and performing on their first new album in nine years, The Formation Of Damnation. It’s interesting to note that Testament has had its share of well-known metal drummers on the throne, including John Tempesta, Gene Hoglan, and the aforementioned Lombardo, who performed on the band’s 1999 release, The Gathering.

Recorded at the legendary Fantasy Studios in Berkeley, California with producer Andy Sneap, The Formation Of Damnation clearly showcases Bostaph’s powerful gifts. There’s the double bass damage inflicted on “More Than Meets The Eye,” as well as the tightly syncopated slams on “The Evil Has Landed,” which presents the mature, technically-minded, full-throttle metal slamming Bostaph is most known for.

Bostaph credits his success to his willingness to take risks behind the kit–including exploring different styles with other projects. “Taking risks has made me a better drummer,” he insists. “Sure, I’ve fallen flat on my face plenty of times. At times I’ve learned just how ‘metal’ I am. But you can’t learn to flip the switch to another style unless you’re not afraid to jump into the cold water. Some people dip their toes in the pool to check the temperature. But some people go, ‘Screw it! I know it’s cold, I’m jumping in.’ I believe you have to do that to really find out what your strengths–and weaknesses–are.”

MD: You played with Testament briefly several years ago. How did they get you back in the band?

Paul: Well, it kind of started with some unfortunate things that happened to their previous drummer, Nick Barker. He had some visa issues, and they wouldn’t let him back in the country. I have no idea what the reason for that was. But they had a week of shows that they’d committed to doing in the United States, and no drummer. 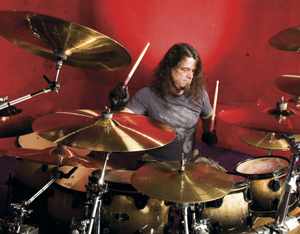 I’ve known everybody in Testament for quite some time, and we’re all from the same San Francisco Bay Area thrash scene, so it’s kind of like family. Every time they’ve had trouble, I’m one of the guys they’ve called. When they found out Nick couldn’t do it, it just so happened that I wasn’t in a band at the time, and I did have the time, so I said sure, I’d love to tour with you guys. I think the vibe was really good between all of us. It just felt right.

Most importantly–and unfortunately–at the same time, they weren’t sure what was going to happen with Nick. They wanted to go into pre-production for a new record, but they didn’t know what Nick’s status was going to be. So they asked me if I’d be willing to fill in for him during some of the pre-production process. As that situation developed, they realized that Nick wasn’t going to be able to get into the US in time to do the record. So after speaking with him, they asked me to join the band.

MD: Talk about making this record.

Paul: The songs were the most important thing. And when we got into the studio to do the drums, we really focused on the drum parts. [Exodus guitarist] Eric Peterson, who’s the main songwriter of the band, has a lot of syncopated stuff he likes to do. He almost thinks like a drummer with a guitar in his hands. He likes to have those parts synced up between the guitar and drums, so we did a lot of meeting of the minds. He’d have an idea and I’d try to make it work on the drums and make it better. We didn’t waste any time–we were in the studio for ten days, from getting tones to finishing. And I think we got the best results we possibly could, given that amount of time.

MD: How quick are you in the studio? Can you usually knock things out in a couple takes?

Paul: I would love to be that guy. But I’ve got to dot the I’s and cross the T’s. So I’ll go in and do about five takes of a tune. That’s about as many takes as I need. There’s always going to be one take out of all them where the overall body has the fire you’re looking for. From that base, I like to go in and punch in any fills that I feel will help improve the track–that’s what I mean by dotting the I’s and crossing the T’s.

Read the rest of this interview with Paul Bostaph in the June 2008 issue of Modern Drummer. Modern Drummer is available at your favorite music store, bookstore, newstand, iTunes/iOS store, and Amazon/Android Market.