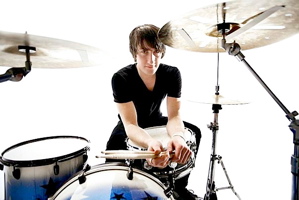 ’Sup, guys! This is my very first blog for the Modern Drummer page but fingers crossed it won’t be my last, so here goes. My name is Mal Taylor, and I’m the drummer of Leeds, UK rock band Your Vegas, now based out of New York. This blog is coming at ya from the back of our lovely Ford van as we travel nine hours from New Orleans to our next show in Nashville. We’ve been on the road since January, opening up for The Bravery on their US tour, and I must say the whole experience so far has been amazing.

So, drums? Well, I’ve played them for twelve years. I began when I turned thirteen: They looked cool, and they were loud. My mum, however, didn’t care about cool, nor did she care for loud instruments. But I promised her that I’d practice one hour a day, six days a week, and let her have peace and quiet on Sundays. We struck a deal, and I got the white Pearl Export I’d been wanting and my mum got her Sundays. So thanks, mum!

I’m a self-taught drummer and began picking up the basics as I tried to play along to songs in my garage back home. I remember the very first song I played to start to finish was a track by Oasis called “Cigarettes And Alcohol.” As I developed, I worked my way into more complicated songs and spent the best part of two years practicing before I even considered joining a band.

Like most of you, I joined a band at a young age. We were terrible, but just to be playing with other musicians was the greatest thing ever! It wasn’t until many terrible bands later that I really started to grasp the concept of songs and focus on what a drummer should bring to the table.

I’m not a complicated musician; I like to keep things simple, and I adopt the “less is more” approach. But it’s always important to try to maintain the drive, feel, and power that any drum track should bring to a song. If you want to get an idea of someone who does this very well, then check out one of my idols, Tico Torres of Bon Jovi. Tico’s a fantastic Latin player, but the man knows exactly what’s needed when it comes to a classic rock track.

I’m sure all drummers have their own way of approaching a song, but I focus on the lyrics, the song meaning, and obviously the style. You’d be surprised at just how many ideas for beats, fills, and accents you can achieve by focusing rhythmically on certain words. This is something I picked up in pre-production during the recording of our debut album. I got Coyle, our singer, to explain the song meanings and give me copies of the lyrics. As I learned, studio work can be tough, and like they say, “Time is money.” So be physically prepared for a battle, because sometimes you’re up against the clock. Tracking can sometimes last all day, and it’s tiring work, depending on the amount of songs you’re trying to get down. I can’t stress enough to take regular breaks, keep hydrated, and most of all, warm up (to a click) before your day begins.

So, like I said, I’m currently out on the road, and for me this is the best part of being in a band. I love to travel. During our live shows we use a lot of backing tracks (mostly pads), so I’m always hooked up to the click. We run the click and the tracks through a program called Cubase SX. I know a lot of drummers use other programs–Pro Tools, Ableton Live, etc.–but ours is a simple setup and works well for the live shows.

Touring is great, but it does mean that a lot of your time is spent sitting around. So my advice for being on the road is to try to eat healthy, exercise when you get the chance, keep hydrated (beer included), don’t forget your sticks, and ALWAYS warm up before shows.

I’d like to finish by giving you guys some info on my current setup. At the moment I’m using my custom-made kit by Jackson Drums, consisting of a 22×22 kick, a 6×12 rack tom, and a 14×16 floor tom. My Zildjian cymbals include 14″ Mastersound hats, an 18″ A Custom Medium Crash, a 21″ Crash Ride, and a 16″ SFX Crash (fantastic for accents). Heads are all Evans G2s, and I use Silverfox 2B sticks. Ha! I’ve just noticed Coyle has fallen asleep, but he’s somehow made a makeshift pillow out of my spare drumheads. Singers, eh!

Check out Your Vegas at www.myspace.com/yourvegas.