My first experience with drums was stealing my brother’s sticks and playing to MTV videos on a drumset I made out of pillows on my living room floor. I also used to sneak into my brother’s room and play on his 1967 Ludwig Kit. I learned on that kit. Still have it today, and recorded both albums for The OaKs with it.

When I was in the fifth grade, I talked my mom into taking me to the Lakeland Civic Center to see Rush on their Grace Under Pressure tour. As soon as Neal Peart broke into “YYZ,” that was it. I knew that I wanted to play drums. Cliché, but true!

I began studying percussion formally in the seventh grade, at age twelve. Stick Control, mallets and timpani. Joined the drumline as well, and played snare from seventh through twelfth grade.

About that same time I played my first concert in a punk band in Tampa, opening up for a touring punk band from California.

There my tastes expanded even more. I studied percussion as a performance major for close to three years, playing in the Wind Ensemble under Dr. Mallory Thompson. When she left to take a job at the Chicago Conservatory, I decided that the school approach to drumming was not for me. I switched my major to philosophy, and began taking random gigs around town, and just playing for exploration and fun.

At that point I got into Indian music, electronic music, fusion, hip-hop, drum ‘n’ bass, and deep bebop. I met Ryan Costello at that time and began figuring out Zakir Hussain riffs on my djembe (no kidding). Also started experimenting with found implements (like playing my kitchen sink with marimba mallets) and recording them, etc. It was also during that time that I began writing through recording, multi-tracking, etc.

For the first time, I was playing solely as a creative artist, and not just playing other people’s compositions as a session player–although I feel grateful for the path I’ve taken, definitely. Wouldn’t change anything.

I eventually got my MA in philosophy, and decided to show up for a marimba audition at Busch Gardens in Tampa, FL, landing a part for a big Stomp-type stage show. I graduated, and my wife and son and I moved to Orlando, where I began to sub everywhere I could. I played Zendrum for a Moroccan band at Disney’s EPCOT center, which began a massive education in North African and Arabic music and rhythms with Amir Ali, the leader of the group (who has just recorded with Victor Wooten on his new album). I also began working with the Groove Chefs, a trash-can drumming trio at Sea World Orlando, playing electronic drums on a parade float at Disney’s Animal Kingdom, playing drumset with a Persian songwriter from L.A. named Kouros, backing up Nonsense Records hip-hop recording artist S.K.I.P., playing drums and Zendrum with The Future Funk Collective, and, of course, writing and playing drums and percussion for The OaKs with Ryan Costello. In addition, I was taking random sessions all along the way, putting my wife through nursing school, and just enjoying life.

My strengths?
1. Diversity of styles–I spent a whole year just emulating electronic beats from artists like DJ Cam, Squarepusher, and Thievery Corporation. I listen to hip-hop, Arabic classical music, Arabic jazz, fusion, trip-hop, indie rock, percussion ensemble music, bebop, classic rock, Brazilian music from bossa nova to Yoruban ritual music–everything. I believe in building an ever-expanding musical vocabulary through listening to as many different styles of music as possible. In fact, I get my greatest inspiration through listening to non-drum music–like Bartok, for example, or John Coltrane’s saxophone. Dynamics is such an important aspect of the drums, and is often overlooked.

2. Creativity on the instrument–I approach drumming melodically, but with the number-one concern being the pocket, and the space between the notes, so that everything feel good first and is simultaneously interesting to listen to tonally and rhythmically.

3. I try to remain humble. Humbleness fosters openness to new things, which means I’m always growing and expanding. That’s the attitude required to be the kind of player people want to play with and hire back time and again. There’s no separating personality and perspective from performance quality.

4. To me, drums are like paint and a blank canvas: It’s a medium of personal expressions though which I can channel my soul into the world. It’s hard to explain. But drumming is so much more than showing off chops. 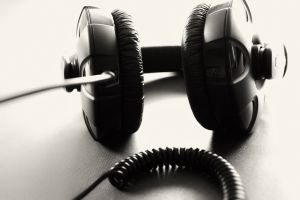 Now, what's on the MD editors' musical minds this month…

On the Beat With Bobby Jarzombek of Fates Warning: Talks Theories of Flight Videos