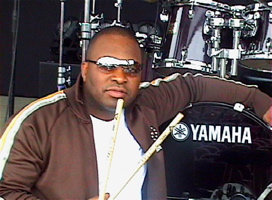 Facility vs. humility. (Being a professional Modern Drummer.) And the winner is?

It took me quite some time before I recognized that drumming would be a such a dominant part of my life–and even more importantly, that I’d be able to make a living at it. Because of my delay in being totally committed, I felt like I was behind my peers. So once I made the choice of committing to what I believed, I began a vigorous regimen of practicing and studying drumming and music. I always had sticks in my hands, and I was always either listening to a CD or watching a video–countless hours of practicing and listening to recordings.

What I didn’t do was realize the role of a drummer in a band situation. After a while I could gratify myself by playing along with CDs that had Dennis Chambers, Dave Weckl, Jeff Davis, Chris Dave, or Gerald Heyward on them. But playing with a group of real people was a totally different experience for me.

Okay, so now I’m starting to get gigs around, and I’m in a club, about to play the fastest single-stroke roll around the kit—on a ballad—with a vocalist. I would turn the beat around and/or displace the beat on a tune while a room full of people danced, so I could listen to it on my recorder later that night and be like, “Yeah, I’m a killing!” But I wasn’t paying attention to the fact that no one was dancing because I’ve totally taken the pulse away from the listener for the sake of my own listening and playing pleasure.

So the moment I realized that I wasn’t totally connecting to my audience, I tried a different approach. I started exploring different nuances in music and trying to be stylistically true to the situation I was in. I love music in many different styles. So I began to study drumming in a more stylistic and song-oriented manner.

An artist or music director can tell when you’ve done your homework, and whether you can play. There are plenty of talented drummers on the scene, but I’ve learned to be true to the playing situation I encounter, and enjoy it. The reason I’m working with so many artists now is because I understand that in a band you must be a role player and not the star. Trust me, your chance to shine will come.

So, in conclusion, the winner is…

BOTH! Be humble enough to be a team player, but have the facility to pull off what is necessary for the task at hand.

Eric Valentine has played with Gerald Albright, Erykah Badu, Stevie Wonder, Jonathan Butler, and a slew of other R&B heavies. For more on Eric, go to www.myspace.com/ericvalentine01.