A View From The Cymbals 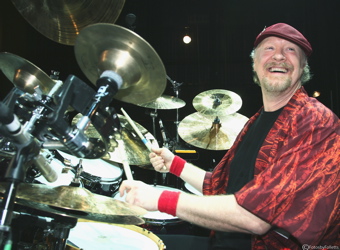 So many notes. Big notes, small ones, LOUD ones, and very quiet little guys. Fast flurries, slow ones, legato passages, and staccato accents, all living side by side in relative, undisturbed harmony and alternating discord. Pushing, pulling, highly rhythmic, and contrapuntal polyrhythmic digressions and counterpoints for “on your toes” precision thinking. Thick, tough chords, dense and delicate harmonies alike. Simple, plaintive, urgent, wistful single melody lines floating above it all, somehow cohabitating in occasionally uneasy truces with the other elements. Mistakes, blunders, flams, the odd comical train wreck, and really getting it satisfyingly right too, all make up an evening of hard work, sweat, fun, laughter, musical tension & release, and stage clothes fraying under the acidic perspiration from our brows and bodies.

Bluesy, jazzy, psychedelic, classical, rock, folk, and Middle Eastern elements, rubbing up against one another–in the nicest possible way, I might add–all competing for parental attention and trying not to get into fights with one another. Perhaps a minor skirmish now and again, but mostly being a reasonably cooperative family. Metaphorical and literal apply here.

From ragas with Hari Prasad Chaurasia to Bach’s Double Violin Concerto 300th Anniversary Birthday Tribute, Celtic outings with The Chieftains, folky musings with the fabulous Fairports, blues bashes, classic rock re-interpretations, or periodic backup band for acts from Procul Harum’s Gary Brooker to Willy Porter. Or perhaps we might be in the mood for some classical crossover excursions with Lucia Micarelli or Andrea Griminelli, gypsy grooves with Anna Phoebe, backwoods bluegrass swing with Ann Marie Calhoun, and from time to time, even the dreaded “jazz odyssey” explorations with any number of people, are all characteristics of the searching and, at times, frankly confused spirit of the band. Ahhhhhh—but we do have a lot of fun!

Extreme dynamics, light and shade, some agony and moments of ecstasy, occasionally questionable and colorful humor, theatrical excess, silly skits and even sillier outfits, English reserve and understatement, momentary unilateral extroversion, all colliding on the bandstand in the name of ecumenical entertainment and artistry, that some of you have come to know and love as Jethro Tull. At least that’s my perspective.

Ian’s singing and songwriting, of course, has always been the heart and soul of the band. But each individual’s playing style and personal stamp has helped to create and define the rich, colorful, varied, and changing textures of the band’s identifiable sound over its forty-year history. Muscle, intellect, heart and passion and quite a bit of sweat, work together in relatively equal measure and are the guts of the machinery behind the individual and collective performances that we work very hard to try to deliver. Every musician that has ever played in the band has had to bring these very necessary ingredients, and even if these qualities were not always contributed in equal proportion and balance to one another (drummers perspire a bit more), they were nonetheless always very much in evidence, forming the basis for the identity of that particular Tull aggregate.

So much travel–supersonic jets to twin-engine puddle jumpers, sleek German ICE trains, luxy-plush and state-of-the-art to the groaning Eastern European, post WWII (but only just) passenger relics, tour buses, rented cars, limos, boats, ferries, even a hydrofoil plus a few other more exotic and unusual modes of transport. Ever encountered an Indian “boombalalia”? Personally experienced in Bangalore, it is little more than a motorized three-passenger trike with a beach umbrella fastened to the back, covering the twin rear-passenger seat. Savagely tearing through the perpetual Indian rush-hour traffic at breakneck speeds, it guarantees that your “sightseeing” trip will be memorable and mercifully short.

Or how about the elaborately equipped Bombay taxicab, complete with pressed white linen on the seats, at least one hundred of the latest weather-reading, traffic-predicting gadgets and communication gizmos, Velcro’ed onto the dashboard without a millimeter between them, and best of all, your own personal revolving disco ball, hung in place of a center interior light, that transforms your Bombay taxicab experience into “Saturday Night Vindaloo Fever.” Thrill to the sights, sounds, and smells of Bombay through the ever changing, refracted purple mirrored light ball of your personal mobile Indian disco, as it hurtles through the streets faster than the allowable speed limit on the California Interstates, barely missing dogs, children, pedestrians, street vendors, sacred cows, and other “disco taxis” screaming by in the opposite direction. Adrenaline junkies beware.

We’ve explored widely, performing from the steaming South American and Asian countries, the plains of South Africa and the land down under, the roasting Indian sub-continent, the ancient amphitheaters of Turkey, Greece, and Israel to freezing, austere Russia, the dark and frigid Nordic countries in the depths of winter or across the beautiful, dramatic, and forbidding reaches of Alaska, Bolivia, or northern Scotland. Extreme heat and cold, snow, rain, ice, fog, blue skies, sunny days, temperate gulf breezes, and gale-force gusts. Understated European elegance and tacky wear-it-all-on-your-sleeve wealth to the grinding poverty of some third-world countries, it has been an interesting and amazing journey through music, culture, time-zones, and compound time signatures, extraordinary people and of course—food–glorious, exotic food! Every continent and more countries than I can remember—. Thousands of gigs and hundreds of thousands of miles would be a very conservative estimate. We’ve traveled and seen a lot, and we’re still here to play another concert.

Consequently, over the years and after so many logged frequent-flier miles, it has been my observation that the temperament and response of the average person in our audience is in direct relationship to their general weather pattern exposure, with a few notable exceptions. All the hot-weather territories seem to invoke a more demonstrative, louder, and at times more volatile response from the audience. Spain, Italy, India, some South American and southern European countries, and southern states in the USA come to mind. Conversely, Scandinavia, England, some northern states in the USA, northern Europe–basically the colder-weather territories, with Germany being an exception, seem to elicit a more reserved, although no less of an appreciative audience response, with fewer tendencies to shout and holler mid-song. Japan is another interesting exception here. They have extremes of very cold and hot weather, and yet they are, without doubt, the most reserved of any audience I have ever encountered. Quiet, nearly silent, but very respectful and deeply appreciative, they just choose to show it in a different way. Here it’s cultural, not climatic.

At first it would be easy to misinterpret either response. I’ve come to understand that the quieter, much more reserved audience is just as happy and appreciative of being there, despite what could be misconstrued on the face of it as polite indifference or even apathy. On the other hand the louder, more unruly crowds could be forgiven and unfairly dismissed for being labeled un-listening or obnoxious. Most of them are really listening intently and tend to show their appreciation quite visibly and audibly, usually at the end of a piece of music. Unfortunately, there is always some knucklehead who insists on shouting out their favorite song in the middle of the quietest imaginable part of the music, disturbing everyone, as if we take requests and would be further inclined to stop whatever we were doing to accommodate their wish. It’s usually a “him,” I’m afraid, as the women tend to be better behaved. Sadly, it’s often some very over-refreshed individual who insists on continually interrupting, and one thing I can conclusively say is that, hot weather or cold, nobody likes a loud, disruptive drunk. And if they’re not drunk, then they really should know better. Go home and shout at your CD. HARRRRRUMPH!!!!! I feel better now. 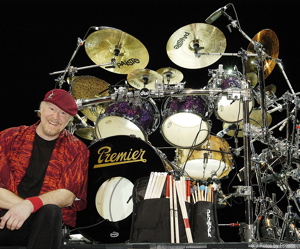 A globe trotter’s dream gig and a tour manager’s logistical nightmare. Equipment, luggage, and bodies to be trucked, bused, planed, trained, or ferried to the next destination.

“Oh, they only have to work two hours a day—how hard can that be?” That’s right, our personal assistants wake us up at about 5:00 p.m., then order steak and champagne from room service, check on our wardrobe, and get us ready for our individual, fully equipped and personalized limos–one for each band member, of course–which pick us up at about 7:30 p.m. (7:25 p.m. pickup for those of us who want to practice beforehand—yawn). We arrive at the gig about ten minutes before show time and with a little light-hearted backstage banter, casually saunter onstage. Lighting rig set, amps on standby, guitars, flutes, keyboards, basses, drums all perfectly set up, ready, and meticulously tuned beforehand by our hardworking, fun-loving crew, and then, to quote Mr. Showbiz himself, Sammy Davis Jr., it’s—”MAGIC TIME!”

The true life of a touring musician in 2008 would be a disappointing reality check for some of those who would rather continue to believe that we are all living like Keith Richards. I’m not really sure how he manages it, but for the rest of us rank-and-file musicians, our days are long, fairly disciplined, and devoid of much of the glamour and excess so commonly and erroneously associated with touring bands. Sleep is a sought after commodity, even a luxury at times. We work pretty hard, practice our instruments, refine the arrangements constantly, and are kind to animals.

As you read this I will be entering my twenty-fifth year with Jethro Tull, celebrating a quarter of a century in a band that’s celebrating its fortieth year as a working musical entity. This is, in itself, a minor miracle to me, and maybe to the others too. Upon joining the band, I can clearly recall feeling that fifteen years seemed like an extraordinary run to have in the music business. Needless to say, I couldn’t have really imagined being here twenty-five years further on.

I always told myself that I just wanted to be a working musician. I guess I got my wish.

So—you can knock me over with a feather.

For more on Doane and Jethro Tull, go to www.jethrotull.com.

Picture of Doane & dog by Heather Woodruff Perry. Photos above by Folletts.