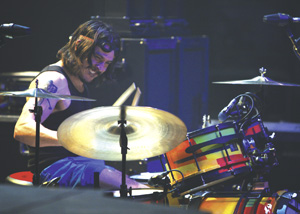 In a wildly successful twelve-year career spanning five award-winning albums, Australian rock trio Silverchair have ridden an astounding creative musical trajectory. Few could have imagined that the “grunge version of Hanson” responsible for 1995’s breakthrough debut, Frogstomp, would metamorphose into the vibrant, ’70s-influenced art rockers you hear on 2007’s Young Modern. After a five-year break from recording, drummer Ben Gillies believes that Silverchair experienced a rebirth during the sessions for Young Modern.

For Young Modern, Ben and vocalist Daniel Johns envisaged a dry, fat drum sound similar to ’70s recordings by Fleetwood Mac. “We tried various things to achieve that sound, from the classic Ringo method of putting tea towels on the heads, to putting newspaper in the bass drum, to placing magazine pages, covered by a thin sheet of construction paper, on each drum.”

The drummer also made minor adjustments in his gear, using “fluffy beaters” on the kick drum and abandoning the use of traditional hi-hats. Ben explains, “The hi-hat’s frequency can be a bit harsh and overpowering. I ended up using two thin 14″ Sabian crashes for my hi-hat. The thinner cymbals gave it a nice groove and kept the flow.”

Gillies also enjoyed recording without a click track. “I reckon they take away the human element of playing drums,” he says, “because it’s just natural to speed up and slow down.” To ensure his timing was spot on, Ben first practiced extensively with and without clicks. “I’d program the clicks really far apart,” he explains. “I’d start at 140 bpm, halve that, and halve it again to get to 35 bpm. Playing to that involved concentration, and working with that space helped my feel as well.”