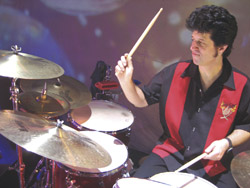 Tony Pia’s entrance into The Brian Setzer Orchestra, replacing drummer Bernie Dresel, was short and sweet. “I played like three songs,” the drummer recalls of his audition for Setzer, “and he shook my hand and said, ‘You’re in.’ Then he went on tour with The Stray Cats all summer, so we only began rehearsals in the fall.”

Pia describes the gig as extremely diverse. “You need to have a good deal of experience playing rock ’n’ roll and playing hard,” he explains. “But you also have to be able to swing, have experience playing with a big band, and be able to read big band charts. I played with Maynard Ferguson’s band, Woody Herman’s Orchestra, The 1:00 Band, and Bobby Caldwell’s big band, so I think that qualified me. Plus I had rock ’n’ roll experience from playing with Edgar Winter, David Lee Roth, and Van Morrison.

Clearly Pia has to cover quite a few bases these days. In the middle of the current show, Setzer breaks down the band to a rockabilly trio format, with Pia on a stand-up drumset. “The challenging thing is the versatility that’s required. You have to be able to drive and swing hard with a big band, and then play quietly with brushes with a small group. On one song I actually have to play a bell part. I never thought I’d have to do that. I studied marimba in college, so that’s coming back into play.”