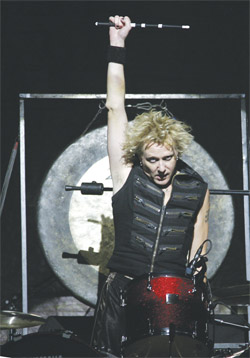 Twelve years into James Kottak’s tenure with The Scorpions–a gig that’s taken him everywhere from Siberia to Brazil–the Kentucky-bred, LA-based drummer finally feels like he’s made an album with the legendary band he can live with.

Deeming 1999’s Eye To Eye “too loop-heavy” and 2004’s Unbreakable “too Pro-Tool’d and generic,” Kottak says their latest, Humanity–Hour 1, was the perfect storm of strong songwriting, technology, and inspired drumming.

“It took some time to hone the songs,” Kottak says in his southern-fried rasp. “But once guys like [outside writers] Desmond Child, Eric Bazilian, and Marti Frederiksen did their thing with our demos, it was like, ‘Whoa, yes!’

“Then I recorded my Yamaha electronic kit over those tracks–we quantized it and made it perfect. Over those drum tracks, they went back and put everything on top. Three months later, I went in and re-recorded my parts to those tracks, and I could really sink in and let loose. Now I knew where to accent or where to fill or where to leave space for the melody.”

Kottak almost didn’t take the offer to join The Scorpions (who he first met in 1988 on the Monsters Of Rock tour as a member of Kingdom Come) when it was made in 1996. He was content singing and playing guitar in his band Krunk (now re-named Kottak), with his wife, Tommy Lee’s sister Athena, on drums. Joining an established band as a hired gun didn’t appeal to him.

“When I originally went to Germany to audition, I told them I wasn’t a side guy and never would be,” Kottak recalls. “They understood that, and I’ve always been encouraged to speak my mind. I’m like the junior partner at the law firm of [Rudolph] Schenker, [Klaus] Meine, and [Matthias] Jabs.”