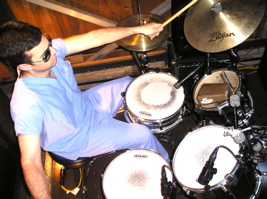 I love drumming as a creative medium, and I value its breadth of expression and many technical challenges. In my opinion, many people fail to appreciate the work of a drummer in a great song, in much the same way a catcher is under-appreciated in a successful baseball game. Both control the rate and rhythm of play, and both jobs require an awareness of process not demanded of other players. But drummers need not sit in the background.

Like an artist using different parts of the brush to create different textures, a drummer can also change the timbre and feeling of a song by adjusting technique–for example, by using the bell, crash, or ride of the same cymbal. These nuances can be so subtle that only the drummer is completely aware of them, or they can be emphatic shifts that punctuate the music like exclamation points. In this way, the drummer not only lays the rhythmic foundation for the music, but also continuously modulates the song’s direction.

My appreciation for these traits led me out of the garage to explore drumming with several full ensembles, each quite different. With The Yale Klezmer Band, I played vibrant folk music from Eastern Europe, infused and updated with modern styles. In contrast, my medical school cover band, Snuffbox, was a loud, hard-hitting, rock ‘n’ roll monster, let loose in the wilds of Greenwich Village. As the pace of medical school began to preclude regularly scheduled rehearsals, I retreated to a solo routine that would keep my skills fresh. I have since scaled back to four or five hours each week, with occasional accompaniment.

Surgery and drumming share a great deal in common. Both require an aptitude for fine manipulation and precision, a tight control over movements in the limbs and digits, and most importantly, a fondness for creative problem-solving, whose ultimate success or failure rests in technical ability. Both drummer and surgeon are inherently team players, and must synthesize efforts from different sources while still directing all to a productive end. If I ever need to trade drumming for the sake of surgical training or practice, I can be consoled by these numerous points of intersection.

Still, I might need to occasionally turn up the volume dial on the OR radio.