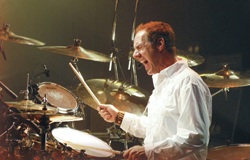 Kelly Keagy is a busy man these days. Known for his powerful drumming with Night Ranger (“Sister Christian” was named one of the “Top Drum Tracks of the 1980s” in a recent Modern Drummer article), Keagy has a new solo album called I’m Alive, showcasing his drumming, singing, and songwriting. “It’s an attempt to write a different kind of material from what I do with Night Ranger,” says Keagy. Other projects include the band Scrapmetal with Mark Slaughter, Gunnar Nelson, and Eric Martin, and Meldiburpho, a group of well-known Nashville songwriters. Kelly is also a reoccurring guest in Jim Peterik’s World Stage shows.

Working with The Rock ’N’ Roll Fantasy Camp gives Keagy an opportunity to share his knowledge. “It’s designed for adults who never had the chance to be in music. The goal is an end-of-camp performance at a place like The House of Blues, where everybody gets up on stage and performs in front of an audience. It’s really fun. The next one is in LA in February ’08, and there’s one slotted for Nashville in ’08 as well.”

For Night Ranger fans, “We have a new album called Hole In The Sun coming out in January on VH1 Classic Records. It has both sides of Night Ranger–the hard-rockin’, guitar-oriented side, along with good pop tunes. I wrote some songs for the album, and we’ll be touring early in ’08.”