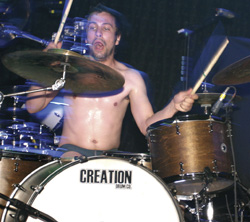 The first thing you’ll notice on The Fall Of Troy’s Manipulator is that there’s a lot of sound happening, for a three-piece post-punk act. Carefully juggling the punishing rhythmic duties of this outfit is drummer Andrew Forsman.

Forsman worked closely with producer Matt Bayles (Minus The Bear, Isis, Mastodon) on the Manipulator sessions to ensure things were locked down tight. “Bayles was really adamant about getting good takes all the way through,” Forsman says, “as opposed to playing just one part and putting it together in the computer. He made me want to play everything as well as I possibly could, without putting too much pressure on me. He definitely keeps you working until it’s exactly as it should be.”

Though Forsman is used to recording with a Ludwig Vistalite kit, he says Manipulator is the first album that he’s tracked with a maple kit, including a custom-made Keplinger snare. The drummer currently plays a burly Creation set, sporting a 14″ rack, an 18″ floor tom, and a 24″ kick. “I just wanted to have big-ass drums that push a little more air,” he says. “But the problem with that is that you have to hit them a little harder. It helps to use bigger sticks. When I switched kits, it took a little getting used to. But at this point, I’m really happy with the way it sounds.”